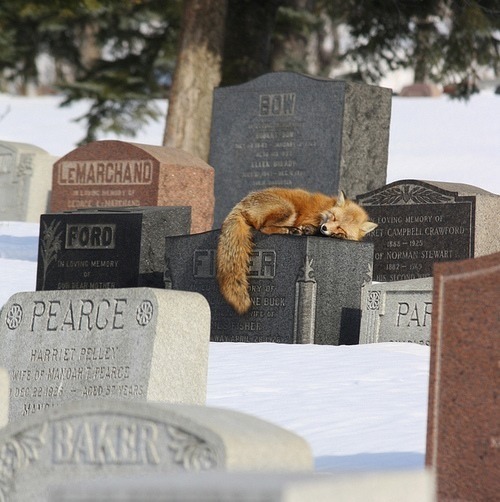 “I often find that, for those of us who submerge ourselves in literature  on a daily basis — whether that be by reading it, writing it or both — the images and stories swirling in our head can flood out in a dozen different ways. While I was coming up with scenarios for a fantasy novel I’m working on, an image popped into my thoughts: that of an old fox who lived in a graveyard and who scared people away to protect the ghosts there. And before I knew it, the image turned not into prose, but into verses that I muttered in the shower, in the school hallways, in bed at night. Eventually, I wrote them down: and a poem appeared before me.” – Carlota Vasquez

In the middle of a city
Many, many worlds away
There once stood a cemetery
With old graves of black and grey
And a single silver headstone
On whose ragged top there lay
A fox of scarred, glassy eyes
And long fur as bright as day
And although its bones grew weary
And it had lost all its sight
It stayed awake, at the ready
Almost every single night
To guard the ghosts — one per grave —
Up until morning’s first light
As they came out of the ground
So they could rise without fright
The ghosts were terribly afraid
Of being spotted or heard
And they would refuse to gather
Unless they were fully sure
That nobody would come near
And nobody would dare disturb
The celebratory games
That all throughout the night occurred
So the old fox, to help them,
Roamed around while he scared off
The people that had come near—
Though few were courageous enough
He growled at them, he chased them
He bit them if he had to
He didn’t want to hurt them
But he did what he must do
And finally, at night’s end
When the ghosts had at last gone
He laid back on his old grave
And now slept, for it was dawn.