“The Youth Governor” Director Jaron Halmy On Making A Documentary 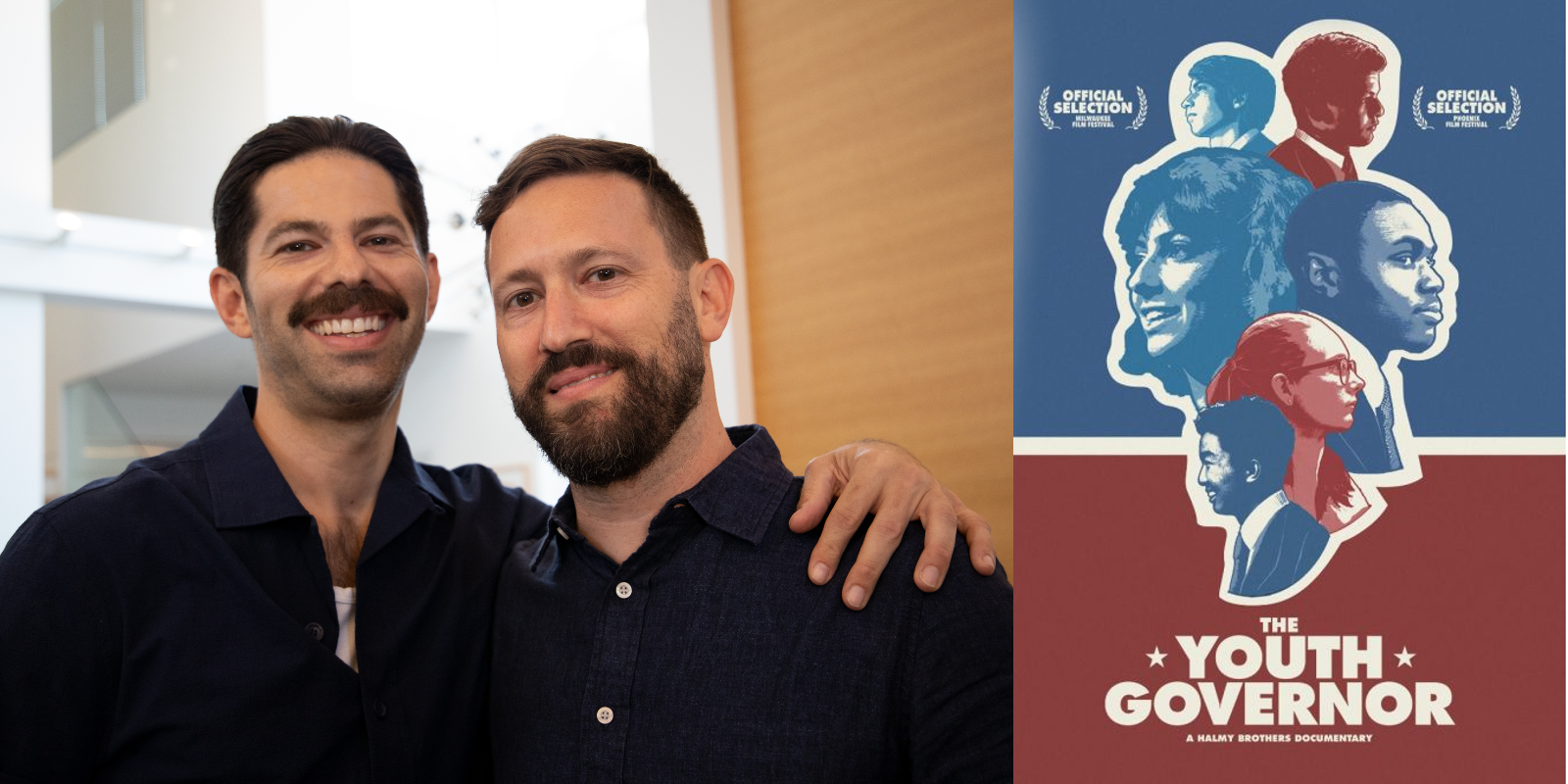 When I interviewed Jaron Halmy, one half of “The Halmy Brothers” in both the literal sense as well as in reference to their production company, I wasn’t quite sure what to expect. My preconceived notions told me that a director should be intimidating, older, and a little excentric, a producer, a wealthy dashing aristocrat, and an editor a gruff recluse. Even though Jaron was all of these titles wrapped in one, he identified with none of these descriptions. He was a young-looking, good-natured, pleasant man who all but made up for his brother’s absence with his boisterous personality and infectious charisma. While Matthew Halmy wasn’t in attendance, on account of him literally attending his honeymoon, I knew the minute we sat down Jaron had more than enough to say.

Jaron and Matthew grew up in Culver City, a part of Los Angeles County, just a stone’s throw from what used to be MGM, now Sony, Studios. While Jaron and his friends used to make videos with their parent’s VHS camera, his passion for film wasn’t fully realized until he attended Culver City High School. Jim Knight, a film bluff moonlighting as a history teacher, had started the after-school film club Jaron joined, “Sony had donated money to the high school and we had all these editing bays and cool cameras.” The club even put a small film festival of sorts together, and it was here that Jaron really discovered his love of film.

“That feeling of the lights going down and the audience getting quiet and settled. And your thing that you’ve been working on for a long time is about to start. Your heart’s pounding through your chest and you’re nervous. And then it happens, and you get that feeling of like completion. I think that’s what propelled me even at a young age to just stick to it.”

The club itself has since blossomed into the now prestigious Academy of Visual and Performing Arts at Culver City High School, and the film festival has since become, “a really prominent thing at the school”. To this day Jaron accredits Jim Knights club for his interest in the industry. Following high school, he studied film at UC Santa Cruz and UC San Diego, but his brother took a different approach, “Matthew went to the University of Colorado for history, and came out and started a really exceptional journalism path.” Matthew worked at local papers around Colorado before moving back to L.A. after college.

The brothers were just starting out in their respective careers when they started to imagine what it would be like if they partnered up, “In 2009, we were sitting together and [Matthew] had just left his job. We were trying to scheme how we could work together. We were talking about what that looks like and we realized that documentary is really the perfect intersection of our paths and our passions. So, we teamed up and we really never looked back.” At first, I’ll admit, I was a bit skeptical about how one could navigate a healthy working relationship with your sibling. See, I too have a brother and I’d imagine there would be no toe left unstepped on if we teamed up in some collaborative effort, but Jaron was quick to quell my concerns. For starters, unlike some well-known sibling duo’s in the industry, where one has the more dominant personality or their work feeds off of their eternal conflict, The Halmy Brothers have a pretty even working relationship. Since they both studied different things, Jaron and Matthew are experts in different aspects of the documentary process.

“We’re just naturally collaborative because Matt will present things and see things from an angle that I just don’t. His journalism background, his love and passion for history, and tracking socio-political lines through stories–that’s really amazing for me to have in a partner because I’m not as naturally inclined.”

So, in 2009 The Halmy Brothers production company was created. The duo started out with smaller jobs, but before they knew it they were picked up by Vice Land to work on Vice World of Sports where the brothers spotlighted sociopolitical sports stories for 2 seasons, “Matt traveled all over the world field producing. I was in the bay editing, and we really sharpened our knives there.” The pair also had some close friends who worked in law, which is how they got involved in filming and documenting different juvenile incarceration issues, “We ended up working with L.A. County. We made a short documentary that won an Emmy for them on the prison medical staff at L.A. County Jail.” The brothers also filmed a Ted X inside of Ironwood State Prison which sparked their interest in going to different jails and finding different issues to highlight.

All of which sounds wildly impressive, but seems to be a big jump from the release of their most recent project, their first full-length documentary on the YMCA’s Youth & Government program titled “The Youth Governor”. The documentary follows the three main candidates for California’s Youth Governor, the highest state position at Y&G, throughout their tireless campaign, primary elections, a series of scandals and mishaps, all the way to who will hold the title. “The Youth Governor” seems like a random topic to cover when compared to The Halmy Brothers’ other projects, but it’s actually more personal than anything they’d ever previously done, “We both participated in the program as delegates as teens. We both ran for different statewide offices. I actually ran for Governor myself–Yeah, I didn’t make it very far at all,” Jaron jokes. “Matt ran for some statewide offices, he was Vice President and even President at one point of our local delegation. When we got out of college we volunteered.”

From the time they participated in high school all the way up to their time volunteering as advisors the pair have racked up a combined 30 years working with Youth & Government. Jaron actually took a stab at his first attempt of “The Youth Governor” way back in 2005. It was his first year volunteering, and he had just graduated college, so naturally, he made the decision to bring his camera and film as much as he could, “So, we made this 80-minute documentary, I guess.”  The documentary was released straight to DVD and handed out to all the kids who participated in Y&G that year. So, in a way, “The Youth Governor” has been almost 20 years in the making, “You know how they say write what you know? We felt as Matt likes to say, if we weren’t going to tell that story, then what story would we even tell?”

Their biggest challenge, initially, was figuring out which story to tell. Youth & Government has a multitude of programs built into it from the Supreme Court to the Senate and Assembly who debate bills, to different parties, different delegations, it’s also a national thing, so different states. It was a struggle to decide which aspect to showcase, “I mean, it took us a while. It took us years to even come to the conclusion that we should just focus on the governor race because we were constantly thinking maybe we should film a kid in each program or maybe we should follow this one thing.” Finally, the brothers decided just to focus on the specific candidates in the governor race. They allowed themselves to explore as much as the kids did, but if the candidates didn’t intersect with a specific program, like say the Supreme Court portion, then neither would they.

This mission statement was tested throughout the filming of the documentary, as there were plenty of points when their focus could have fully deviated from the candidates. During the race, candidate Piper Samuels was targeted by an alt-right undercurrent in her own party. This level of harassment could have led Jaron and Matthew to shift focus onto how harassment and bigotry play a role in politics as a whole, but instead, the brothers held fast to that initial concept of letting the candidates dictate their own stories, “We wanted to just stick to our mission which was Piper at that point. That part of the story had to do with Piper’s experience, not with trolling or bigotry as a topic, which is super important, but we want to stay focused on [bigotry’s] impact on Piper because that’s the story we were telling and that’s who we were following. I think she eloquently spoke to how that made her feel and what it did.” And in a way, by letting Piper express how things affected her, the storyline feels much more authentic than if Matthew and Jaron had tried to shoehorn a lesson in, or completely switched focus.

In a lot of ways “The Youth Governor” highlights the differences between real-world politics, and the idealized world of Y&G. For starters, teenagers are held accountable in a way adults aren’t, and vice versa. The stakes are different, but because of that kids might feel the need to be liked and to be fair to everyone, in a way that adults don’t. Piper Samuels is a liberal progressive girl issued with being the chosen candidate for the California sectors only conservative party, the Trout Party. The most striking thing about this is that while Piper doesn’t agree with a lot of her party, she will go to bat for the Trout Party’s right to voice their opinions, in a way that an adult tasked with the same thing probably wouldn’t. When Trout Director of Policy and hardcore conservative, Ethan Clark, hears that there is an alt-right underbelly in the Trout Party targeting Piper he does everything he can to put a stop to it. There’s a camaraderie amongst these kids and shared respect that you don’t often see in modern-day politics. It’s a refreshing sight, and the Halmy Brothers captured it so brilliantly.

Considering The Halmy Brothers’ successful navigation of the film industry, I couldn’t help but ask what advice they have for any wannabe directors out there. The main thing Jaron stressed was to put your nose to the grindstone, “One of the things that Matt and I subscribed to wholeheartedly is to just put your head down and work at what you believe is a good idea. We didn’t give up, we always say to each other there is no plan B. There were no backup plans. We’re making this and that’s it.” When it comes to documentary making, really their advice is simple, “Just get a hold of a camera or two and a microphone and start filming. A documentary takes endless shoot days anyway, so you might as well start filming a couple of things here and there. Don’t get caught up on having the most expensive equipment and the biggest crew and every single thing figured out ahead of time.” After all, it’s always better to have some footage than no footage.

Even though Jaron and Matthew have spent the better part of five years working on this documentary, if not longer, they have no plans of slowing down, “It’s a crazy moment when you finish a project this big. It’s like you run a marathon and you get to the end and you look at everybody who just finished and you go, ‘all right, let’s run another one.’ A part of you is like, are you crazy?” And while they might be, they’re already booked and busy. Even though the brothers can’t disclose what they’re working on at the moment, Jaron did want to share that they are, “very excited about some of the future projects that [they’re] already involved in.” And so am I. “The Youth Governor” was an excellent introduction to their work, and I am so looking forward to more!

You can watch You can check out “The Youth Governor” on Prime Video or Apple TV right now!