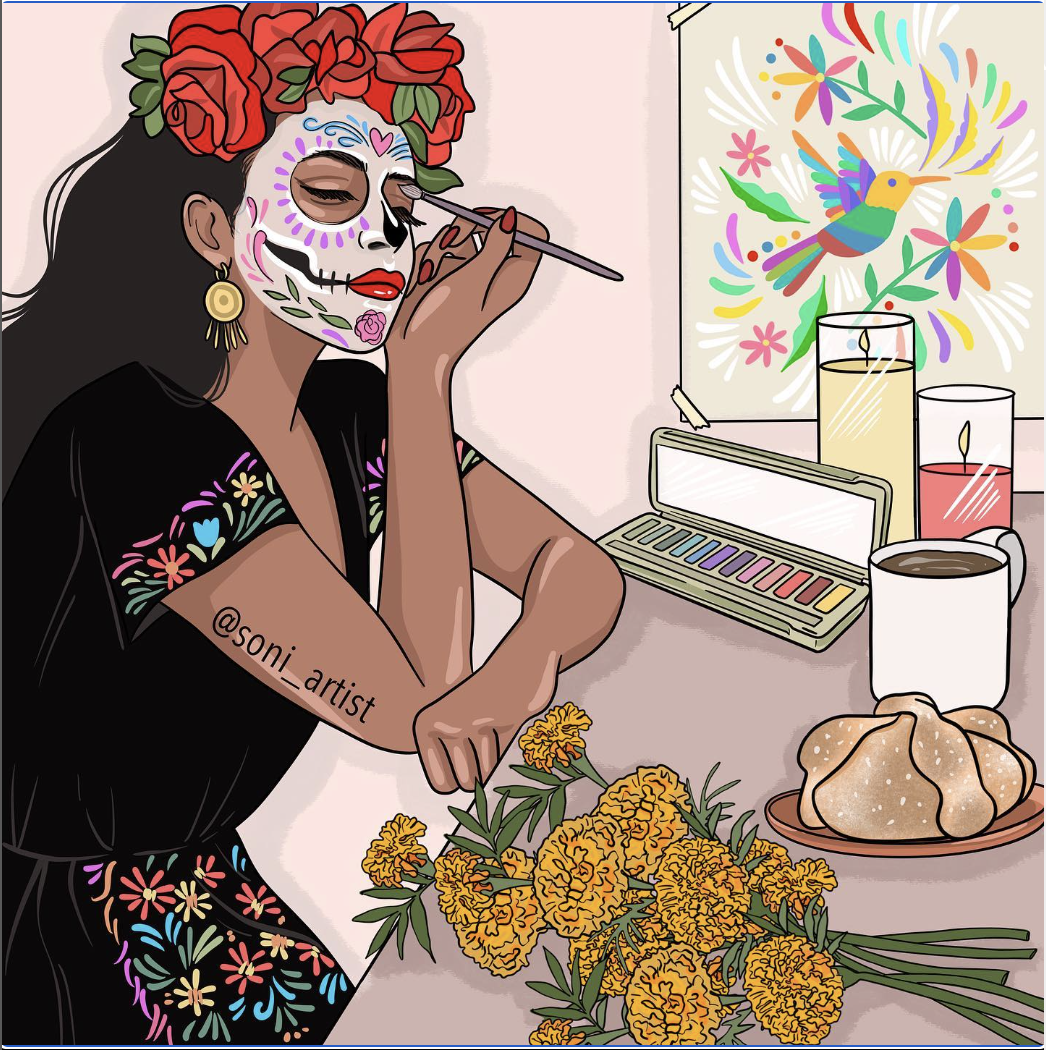 One of the most important things to understand is that, despite their proximity and slightly similar traditions like costumes, Halloween and Día de los Muertos are not connected. With origins going back thousands of years, Día de los Muertos is primarily celebrated in Mexico on November 1st and 2nd. It’s “a festival whose origins are deeply rooted in Aztec beliefs and tied to the goddess Mictecacihuatl, also known as the ‘Lady of the Dead.” November 1st is known as All Saints’ Day, which focuses on and honors children who have passed away. Meanwhile, November 2nd is known as All Souls’ Day. On this day, all adults who have departed are honored. Starting at midnight on November 1st, it’s believed that the gates of the afterlife open to allow deceased loved ones temporary passage to the tangible world where they can reunite with their living family members.

Día de los Muertos is centered around remembering and connecting with these departed loved ones. One traditional way of doing this is building ofrendas. These altars are built at home and must be filled with candles. The candles provide light that guide deceased loved ones home from the realm of the afterlife. Altars also include many food items and pastries, usually ones that were favorites of the departed family member. In addition, altars usually have pictures of the deceased loved one. One can also often see an array of sentimental items—such as jewelry or books—that the dead had a special connection to.

With these personalized characteristics of the altar, there are a few universal items that every ofrenda should have. There’s the aforementioned candles that light the way home for the dead. Along with these candles are marigolds (the flor de muertos). With their bright orange color and strong “musky smell”, marigolds are strewn all over altars. Families may also use marigolds to create a petal path to the altar, a way of guiding the dead as the candles are. Other staple altar items include skulls (usually made of sugar), papel picado (colorful, intricately cut paper), and pan de muerto (a type of pan dulce or sweet bread). Every single item holds a special symbolic significance.

There are so many different ways to build and personalize Día de los Muertos altars so that they’re the best suited for the loved ones you are honoring. Whether you want to add special touches with salt or favorite beverages, or create different styles like a marigold path leading up to the altar, there are infinite possibilities regarding how to welcome home the departed beloved. This is one of the things that makes Día de los Muertos so special, and altars are a great traditional way of partaking in this holiday from wherever you reside.

Of course, there are many other traditions that are a core part of Día de los Muertos. For example, communities and families will often head “to the graveyard for a big party. Families bring a huge feast to eat while they clean tombstones, sing songs, and talk to their ancestors.”  Along with singing, there is usually a lot of dancing that takes place. Nowadays, there are also a multitude of parades and festivals where one can celebrate Día de los Muertos with others. These festivities are not just in Mexico, but also other parts of the world like the United States.

Mexico City is a great place to come together with others to honor the dead with events like the Mexico Day of the Dead Parade, the Catrinas Parade, the Alebrijes Parade, and many more. For those of you reading from Texas, there are some festivities planned here for you to partake in. There are Día de los Muertos Parades in cities like Austin, Dallas, and El Paso. Other U.S. hubs like Los Angeles and Chicago will be hosting city-wide parades and events to honor Día de los Muertos. You can also visit National Geographic to find more places in Mexico where one can celebrate Día de los Muertos and learn about the indigenous history and traditions of this holiday.

There are still more ways to celebrate Día de los Muertos. Many people choose to wear calaveras masks or dress in skeleton-inspired costumes. These traditional costumes and masks are a way of connecting with the dead and emphasizing one of the core beliefs of Día de los Muertos: death and life as an intertwined cycle of existence. However, people who are not Latinx should avoid dressing in such traditional costumes. In recent years, with the rising popularity of Día de los Muertos, there has been an increase in the use of calaveras masks and Catrina costumes in inappropriate ways (like as Halloween costumes). To avoid cultural appropriation and misusing such traditional attire, people who are not Latinx should find other ways of respectfully celebrating Día de los Muertos, like with the other methods of participation listed above. If you don’t wish to watch a parade or build an altar, honoring Día de los Muertos can be as simple as educating oneself about this historically indigenous holiday or wishing “someone a happy Day of the Dead by saying, ‘Feliz día de los Muertos.”