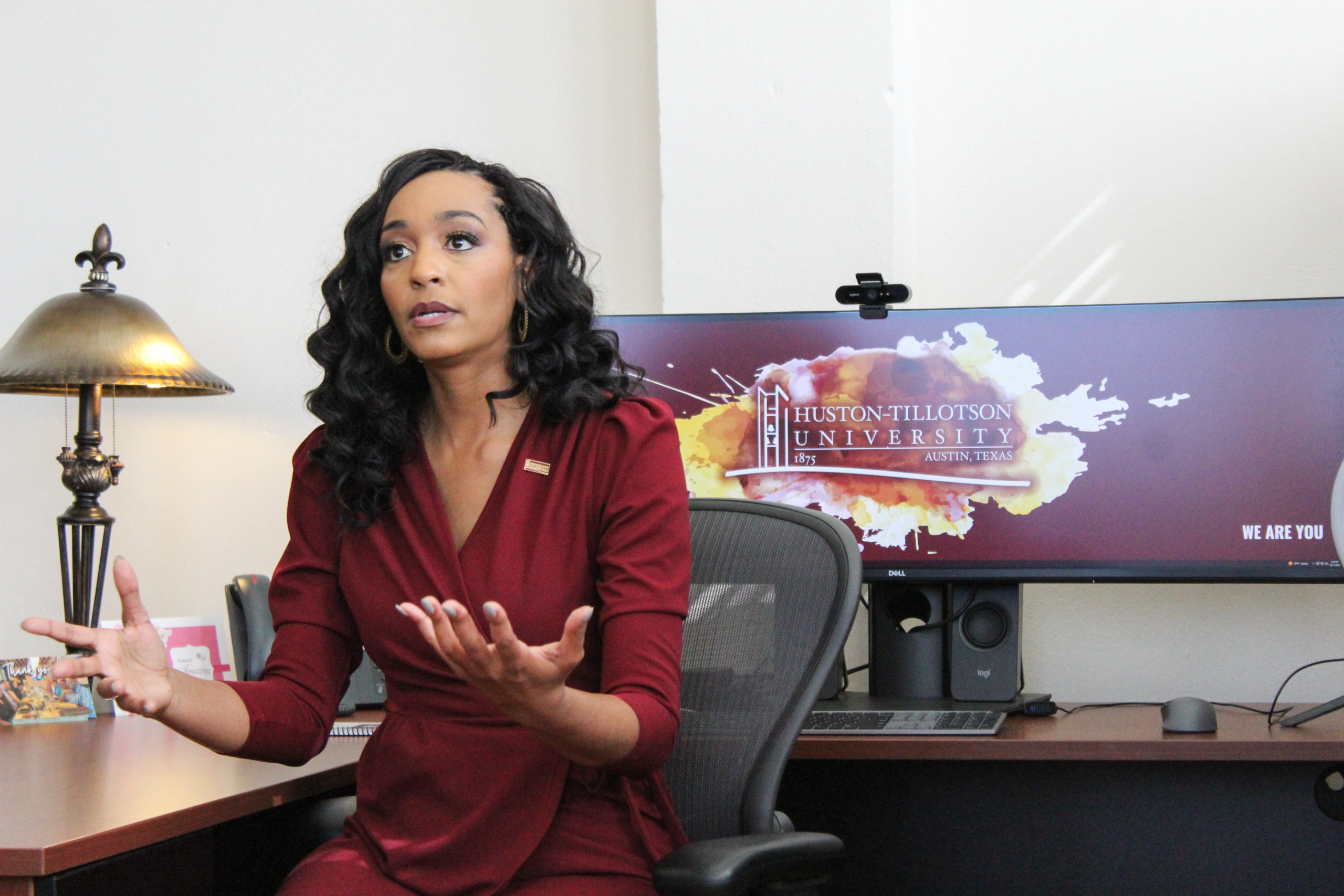 The university recently welcomed Dr. Melva K. Williams as their seventh President and Chief Executive President on August 15, 2022. Dr. Williams in only the second woman president the institution has had, and I had the opportunity to interview her in person to discuss her vision, ethics, and the ways in which she hopes to transform the higher education experience for students in HBCU’s.

Upon meeting her, I was overwhelmed with her kindness and poise, and soon realized this is exactly the kind of leader I would want. When asking her about her feelings being only the second woman president of Huston-Tillotson University, Dr. Williams stated, “Well It feels great! You know so many times women are paving a way in being the first, the first female Vice President of the United States of America, the first in this, the first to go the moon, the first to do all of these things. So it feels pretty great to not be the person that is, you know paving the way in this realm, it goes to show, and is a testament to the board of supervisors and those in position of power to make these decisions to see value in women in leadership.” In acknowledging her accomplishment and historical position, she also took time to acknowledge she is not the first to do it, a response that shows her grace and humbleness.

Given Huston-Tillotson’s place not just as a HBCU, but its location in a growing gentrified East Austin, I had to ask about the importance of the Universities visibility. “Yeah, and I’ve been talking about this. Being in East Austin is, just being the pillar of this side of the community, is an important role to play. And we are going to be the voice and to help others who are doing the work, support those groups and organizations, there is so many that have ideas about the way the community should be going and we have a voice as well, and we definitely want to be a part of that. There is a challenge, and I’ve mentioned this before, just like the way that the cost of living is high.” When agreeing and saying “Yes, it is high,” she emphasized the “It is high .. high is an understatement! I don’t even know another word past high. It is shocking to see the sticker price of a small apartment and it was really challenging and troublesome when this semester we had students who wanted to attend our college, and we were completely out of housing, which is a good problem to have to have students that people want to be a part of the HT experience. And we couldn’t point them to affordable, say, housing..”

Mayra: “Yeah because there isn’t much here.”

Dr. Williams: “Yeah, yeah.. And in the location that people could access. Because there is also a traffic issue that no one told me about!”

Melva: *laughs* “Not having a car! So transportation was also a consideration. So it was difficult to have those conversations with parents and families and students when they couldn’t come to Austin, Texas and they were so excited to be a part of the community, it was a let down. It was tough, it was tough conversations for us to have, knowing we had a huge waiting list, and we just couldn’t fulfill those obligations.”

The lack of funding for HBCU’s and predominantly Black and Brown universities, in conjunction with the growing gentrification and lack of affordable housing in Austin has created ever-growing barriers for Black students to attend universities like Huston-Tillotson. 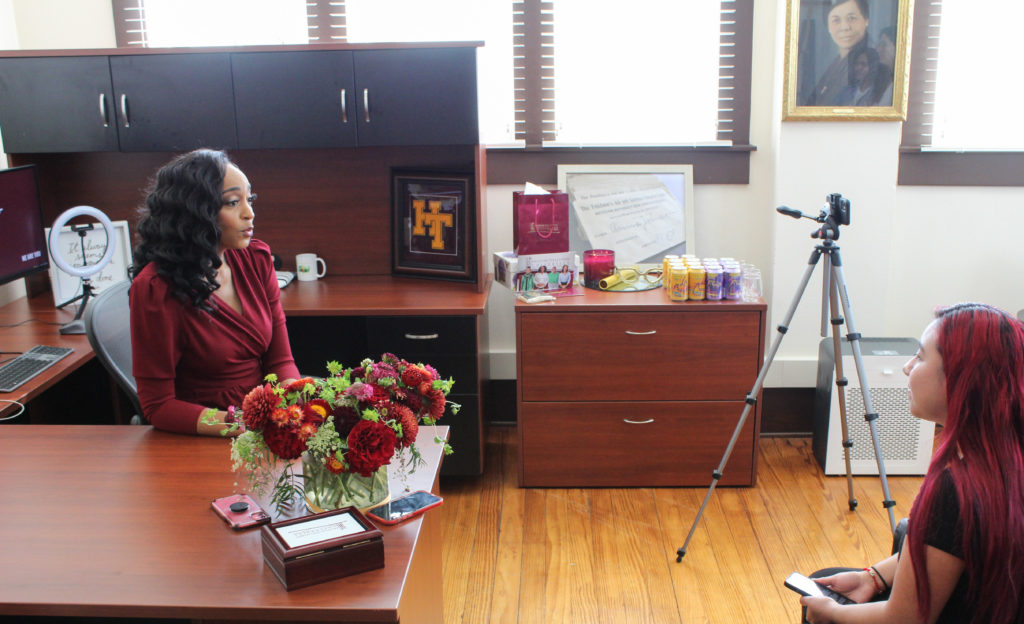 On the importance of Black and Brown solidarity and the ways in which higher ed can support that solidarity, Dr. Williams said “Its a 20 on a scale of 1 to 10! [..] The cultures and experiences we have are so similar. [..] I just think this institution is ideal for those communities to come together. And I’m seeing it already, the population of our students is very diverse.”

Dr. Williams also stressed the importance of supporting students in their creative, entrepreneurial endeavors. “This is a whole new world, this is a whole new environment, we have not gone back in time, we are moving forward. And students want to ideate, they want to create, they want to do things that haven’t been done before, they want their voice heard, they want to be somewhere where people can understand them and help them solve issues and they don’t want to be a part of the assembly line college experience. And that is where you come and you’re just a part of the process, it is just happening to you. [..] that’s what’s different here, it is where we take the ideas of students and we want the crazy… something that you would say that probably can’t be done, and we want to help that student make that happen. That’s where we see ourselves.”

Speaking further on the importance of supporting Black students and their future impact on the culture, Dr. Williams said, “if you look at the focus groups now, the Pepsi’s and the Tesla’s, and the Coca Colas, and the lists go on and on, those focus groups are centered around Black and Brown people who are the biggest purchasers of stuff! I mean we buy haircare, we are buying facial stuff, we are the fashionistas, we are the ones setting the trends and the cultures. And if we’re setting the trends and cultures, come to a place like HBCU’s. They are starting in the spaces of HBCU’s where you have someone like Beyonce who has an album that went I’m sure quadruple platinum that was called “homecoming” that was centered entirely on HBCU’s. So we are the creators of the culture.”

One of the most admirable parts of the interview was Dr. Williams’ strong belief of the positive impact of soft skills, a value she insists on implementing into the University.

“I would say one of the key components to how we move ourselves forward is to really embrace and lift up soft skills, that’s emotional intelligence, the EQ, not just the IQ. And there is no slide on institutions that are focused on the mission, and getting the big numbers, and getting everybody in, but our goal is really focusing on the output, what type of person that we are putting out in the world. We want you to be a leader but we also want you to be able to look somebody in the eye, we want you to have a firm handshake, we want you to be able to resolve conflict, we want you to be professional, we want you to have adaptability skills, we want you to be able to face adversity. Those are the types of soft skills that you need to be a successful person. You need to have those leadership skills, because you can have a degree, and once you have your foot in the door, we want you to not just get in the door but we want you to end up being the President and CEO of said place. We want you to be climbing, moving, growing, and continuing to elevate yourself personally because that’s going to ultimately ensure that we have a strong America. And if we don’t address soft skills, that’s going to be a huge disservice to not only the student, but to the world, because then that student will be going out in the world with just a degree. [..] but it is not just resolving conflict at work, it’s also how do you maintain healthy relationships with your family, how do you continue to connect with church members, and your neighbor, if you have the crazy neighbor playing loud music [..]  It is how do you navigate life? So that’s what soft skills do, and that’s a part of our Quality Enhancement Plan, and we will be doubling down on that.”

Dr. Melva K. Williams holistic approach to higher education and leadership is the most important and inspiring part of the interview that I left with. Dr. Williams is already proving to be a successful leader at Huston-Tillotson University, and will serve as a huge influence to many other Black and Brown women who feel severely underrepresented and misunderstood in their fields and careers.

We want to thank Dr. Williams for opening her space to us and letting us speak with her. Please follow Huston-Tillotson University on social media here.