A love letter to tía Mona 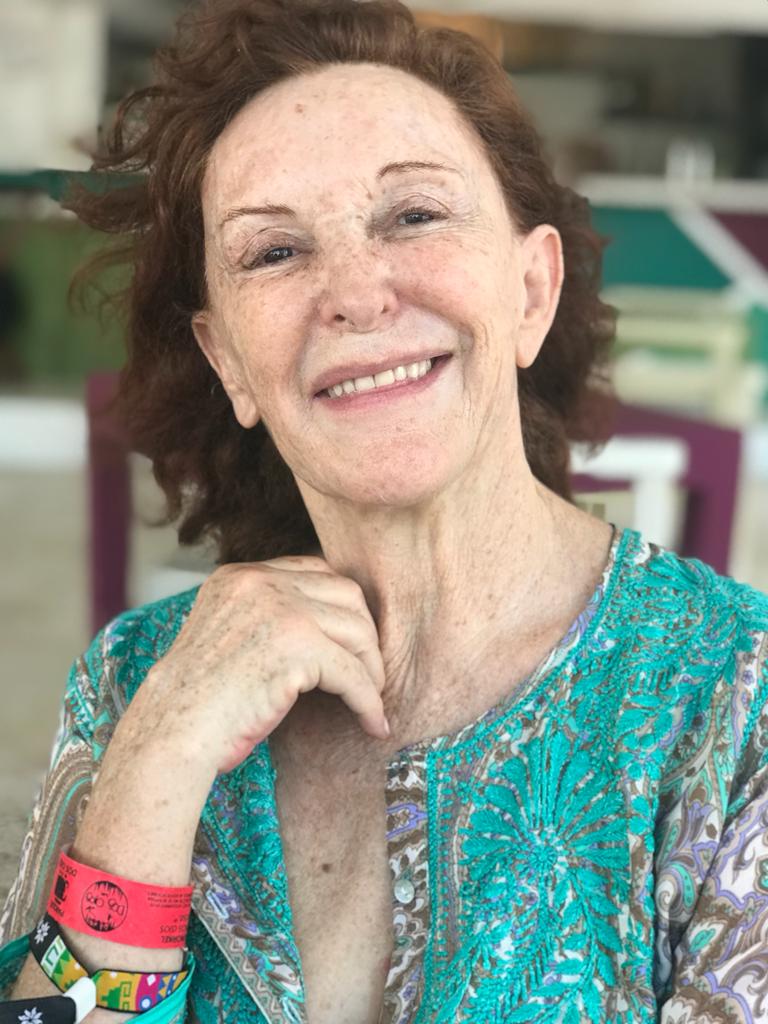 Once my tía Mona asked me to sing her a song. The family had gathered for Christmas, and although many hadn’t come, we were still about 30 people. We were sitting in the living room, and naturally, someone suggested karaoke. Perhaps it was tía Mona herself. It doesn’t really matter. More often than not, family gatherings turn to karaoke. I was delighted, as always, and was the first to sing; and I sang my favorite song, Charles Aznavour’s La bohème.

While I was singing, tío Arturo started talking; tía Mona shushed him, and he obeyed. I sat down beside her when I was done, smiling at the applause and the compliments and the usual exclamations from my aunts (“¡Divina! ¡Hermosa! ¡Ven que te quiero espichar!”). Rodri, tía Mona’s husband, went up to the karaoke machine to sing a cheesy love song from the eighties. She leaned over to me and grabbed my arm affectionately.

“Carlota, I have a song request,” she whispered. “You know that Édith Piaf song? The one that goes, um—” She hummed the air of Piaf’s Non, je ne regrette rien. I nodded. “Learn it, and sing it next time.”

“I love that song. I don’t speak French, but I do know what the lyrics mean. They tell the story of my life, you know. I don’t regret anything.”

She has told me more than once that there are three people in our family “whose soul doesn’t fit inside their body”: my tía Juana (my mom’s sister), tía Mona herself, and I.

Marielena González was two years old when her family moved from Chía to Sutatenza, Colombia. She was happy there. Her father looked over her, and she felt safe among their community.

Marielena eventually moved to Bogotá where she began attending a Betlemitas, a religious school, along with Socorro, her older sister (and my grandmother).

“We both had an awful time there,” tía Mona tells me, “because they had it against us for being antioqueñas.” Since Colombia is such a multicultural country, people that are from different departments have entirely different ways of living — different accents, dialects, food, everything.

And, as is often the case, the girls at Betlemitas rejected what was different. She was a bookworm, as most of the people in my family are (myself included), and since she didn’t have company during recess, or maybe because books were better company than the ones she could have, she read whenever she could. Her classmates nicknamed her Ana Karenina for reading the book. “They said it like it was an insult,” Tía Mona said. “I never found it the least bit insulting.”

When she was eight, they moved to Medellín, and in a twist of irony, she was rejected there for having come from Bogotá. She was bullied for the rest of her primary school, and although a cousin of hers that was in her grade took her under her wing, she was miserable. “I just lost all interest in life. I remember one day snapping out of a trance in Math class and everyone was just talking about decimals, and I was like, ‘How does everyone know how to do this? How do they know what the teacher’s talking about? It was horrible.’”

One day, she came to school with a new basketball that her father had given her, and the girls that didn’t like her had to accept her into the team. She was short, and quick, and very good at passing the ball; but halfway through the game, another girl blocked her and started shouting insults at her — Sucia, bogotana inmunda, asquerosa — and she threw her to the ground and kicked her. She was thrown out of the game, but the girls in the team kept her ball. Her cousin, Margarita Vieira, a blue-eyed blond girl that tía Mona describes as viking-like, encouraged her not to let them.

“We went and bought chontaduros,” tía Mona told me, “and we sucked on them until we had a pile of pits, and we perched ourselves up on a ledge near the basketball field and threw them at the girls. I hit the team captain in the head. That was too much. The nuns hadn’t kicked me out yet because my aunt was friends with the headmistress, but this time I was expelled.” Years later, she saw the team captain again and laughed over the scar on her forehead.

After being expelled she returned to Betlemitas. The quality of the education was considerably worse there; in her old school, they had hired actual teachers, but here the teachers were the nuns. “My literature teacher just read the back blurb of the books we were studying, and I knew more math than my math teacher. I had to catch up on my own, do a lot of work at home, if I wanted to go to college.”

Because by then tía Mona already knew what she wanted to do: study chemical engineering at Pontifica University. She graduated from Betlemitas at the top of her class; and so began her career.

There were more girls in her first year of college, but they didn’t last. Some of them didn’t make it through the first trimester. By the end of that year, she was one of the only two women in her college. Everybody assumed that she was only there to find a boyfriend, and that she would drop out as soon as she did. She decided to prove them wrong.

She’s done a lot of things in her life just to prove people wrong. In her last year of college, she was also a professor of algebra, calculus and trigonometry in the Teodoro Herzl school, a school nearby. She graduated college, once again at the top of her class and was almost immediately hired by Sintéticos SA, a plastics company where she incorporated the project of tracing paper.

“I was the Mother of calc in Colombia! At that time, they only used it to cover notebooks and such, it wasn’t used for decorative purposes at all. It was me who started that. My sisters and I put up pretty calc decorations for people to see, and then they wanted to buy it too, and the business grew from there.”

She left her position as a chemical engineer and went to work in the editorial sector of the company, doing business and marketing. She was responsible for 38 libraries, and she absolutely loved that job — as I said, we’re all literary in my family. She left for Bogota after a four year separation from her partner, Carlos, and they eventually wed in Panama. Carlos passed away from cancer in 1990.

Mariaelena left the workforce and traded it out for a domestic life, which would prove to be as happy and successful as her career had been. She met her second and current husband, Rodrigo Beltrán, in 1991.

Today, tía Mona lives in a big red house with cats, dogs, horses and a parrot that only likes women. They have a spiraling red staircase that my sister and I used to race up and down, which drove my mom crazy.

They have a fake horse’s back to put the saddle on, and Rodri let us get on it every time and we pretended that we were riding a real horse. They come to almost every family reunion.

At the Christmas reunion, Rodri cooked while tía Mona joined the rest of us in the open-air living room. My mom had helped set up the karaoke machine, and I had stood up and taken the microphone to sing La bohème.

Tía Mona has lived a full life, much fuller than most, I dare say. But most importantly, she has lived it wildly, following no one’s instructions, no one’s orders or rules, but her own heart, doing whatever she pleased, however she pleased.

She wasn’t given the luxury to fade away, so she made herself known, and she did it splendidly. She read, she fought back, she studied, she enjoyed herself when she could; she listened to the people she cared about, and those she didn’t care about, she ignored completely; she refused to regret anything.

I aspire to live like that as well. Besides, according to her, both our souls don’t fit inside our bodies. Now that I know all I know about her, about her past, about the meaning behind her words, I can safely say that’s the best compliment I could have ever received. In fact, I believe it is the best compliment anyone could ever receive; and if one day I find that my soul is starting to fit inside my body, I shall make it bigger!

I shall feed it with books, adventures, passion and feeling, and then maybe I’ll be lucky enough to be like my tía Mona.

Editor’s Note: Updated to reflect that Carlos died in 1990 not in 1980 as previously reported.