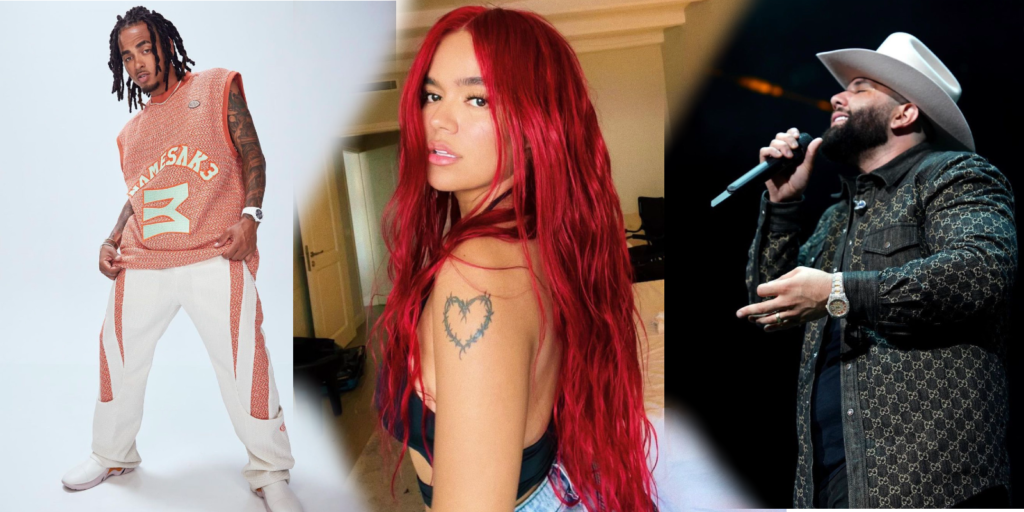 In honor of Hispanic Heritage Month, which starts September 15th all the way through October 15th, I’ve compiled a list of all the Latino artists set to hit the stage in Austin this fall!

Jenny and the Mexicats | Sept. 9 at Parish

Jenny and the Mexicats are an American Spanish fusion band that got their start in Madrid in 2008. They will be performing at Parish Friday, September 9th, and doors open at 7:30 PM. Tickets are on sale for $30 apiece.

Forever Came Calling is an American pop punk band that started way back in 2006 and is still going strong! This year they’re celebrating 10 years of their first studio album Contender. You can watch them live at Mohawk Friday, September 9th, at 8 PM for $12 a ticket.

El Combo Oscuro is a Hispanic band that considers themselves “Latin psychedelia.” You can catch them at Mohawk Tuesday, September 13th, at 11 PM, where they will be playing for FREE!

Tall Juan is a tall (6 foot 3 inches) Argentinean rock and Cumbia artist who has over 6 albums all available on Bandcamp. He will be playing Mohawk Saturday, September 17th, for $10 a ticket.

Carin Leon is a well-known Mexican artist whose been nominated for multiple awards including a Billboard Latin Music Award for Regional Mexican Song of the Year in 2022. He will be going on his first headlining US tour, stopping by Austin Sunday, September 18th to play the HEB Cedar Park Center. Tickets start at $62.

Divino Niño combines the sound of Chicago with the vibes of Colombia to create their very own unique genre-bending music. The bands even received some recognition from RollingStone and will hit Austin stages Friday, September 23rd, at Parish for as little as $18 a ticket.

DJ Vrywvy is a 25-year-old Mexican immigrant who began DJing when they were just seventeen years old. Since then she’s amassed millions of streams and has gone on her “VryLatin: A Latin Experience Tour”. Where you can catch her Saturday, September 24th, at Empire for $25 a ticket.

Carolina Giraldo Navarro is a well-known Colombian singer who creates predominantly reggaeton and Latin Trap music. In 2018 she won a Latin Grammy for Best New Artist and now she’s coming to Austin! You can catch her $trip Love Tour live Tuesday, October 4th, at the Moody Theater with tickets starting at $179. Tickets are going fast, so hurry if you want some!

Omar Apolonio Velasco is a 25-year-old Mexican American queer musician who writes songs in both Spanish and English. You can catch him playing at the ACL Moody Theater Saturday, October 8th, for tickets starting at $35.

Los Angeles Azules is a Mexican musical group that originated in Mexico City. The group is fairly well known and even won a 2020 Billboard Latin Music Award for Regional Mexican Song of the Year for their song “Nunca Es Suficiente”. You can catch them at the Cedar Park Center Thursday, October 13th, for tickets starting at $44 apiece.

Mariachi Herencia de Mexico is a well-known mariachi band that has been nominated for a Latin Grammy Award for Best Ranchero/Mariachi Album in 2017. They are currently working on their fifth studio album Herederos, and you can catch them live at Dell Hall Thursday, October 13th, for tickets $29 starting.

Juan Ozuna Rosado Delano is a Puerto Rican and Dominican rapper and singer. While he’s widely known in the Hispanic community, perhaps his best mainstream feet was getting featured on the song “Taki Taki” with DJ Snake, Cardi B, and Selena Gomez. You can catch Ozuna on his OzuTochi US Tour Thursday, October 27th, at the Moody Center starting at $63.