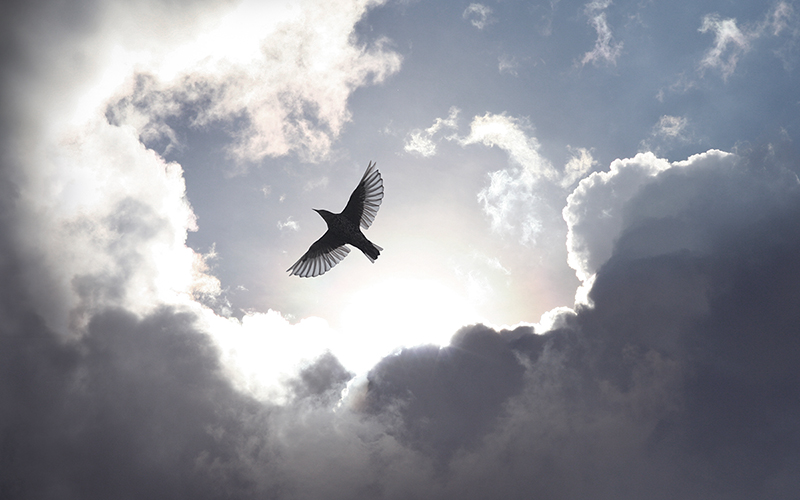 They met while they were both working at a plastic bag factory in Mexico City. He was 23. She had just turned 18. Ana was everything he was not: disciplined, level-headed, and serious. She came from a poor family that lived on the narrow avenue leading to Plaza de Los Martes. She took the 5 o’clock bus every morning wearing the same worn-out uniform, the growling of her stomach intermingling with the sounds of heavy traffic. Sometimes, Ana would spend the entire day without having a bite, or perhaps she would have a moldy tortilla her older brother had dug up from a wealthy neighborhood dumpster and sundried in their patio.

In the factory, Luis had gained the engineer’s trust and was well-liked among his co-workers, especially the women. Ana was not a jealous woman. She was attractive, a proud gazelle, yet simple at heart. Luis boiled with rage when he saw her surrounded by the entourage of disciples that chased her like a swarm of mosquitos. Ana did not mind Luis’ possessive and irate nature that swept away everything in its path when he felt betrayed. He made her feel important and worthy, and love, naturally, had to be this way.

After work, Luis took her to a nearby taco stand. They were small, deep-fried, three-inch-long corn tortillas stuffed with beans, and while they ate, he began to speak about the U.S. He said his father had relatives in Texas who they could stay with for the first few months.

She had worked the apple harvest in California but had never been to Texas and, at the time, running away from home seemed like a radical but permanent solution to escape her mother’s suffocating control. Ana knew college was not an option. She had buried that dream years ago while scrubbing her baby brothers’ feculent diapers. Occasionally, a tear would escape, dribbling hastily down her jaw, then she’d feel the dark weight of the house fall over her.  It was not a solid sadness but an impending, uncontrollable rage that pushed Ana out of the hole that swallowed her and made her feel invisible. As invisible as the putrid air that drifted between the kitchen and the courtyard.

Her mother was never satisfied with Ana’s efforts to whiten those filthy diapers. She was a colorless woman embittered by hunger and misery. She often poured her grief and dissatisfaction onto Ana, who never lived up to her expectations. Her voice was too deep; her hands were too long and bulky. She was too foolish, and the street dogs would swallow her whole if they could. Her breasts poked out like the apple of Eden. She was just another Eve, and so her dreams had been washed down the drain along with those fecal baby stains.

Ana observed Luis intently for a few seconds with her huge deer eyes while he savored the last bite, gulping it down with a big sip of Guava Boing. “Yes. Let’s go to the United States.” Her voice seemed foreign, as if someone else had answered for her. Monotonous.

Perhaps he did not notice. Surely he didn’t, because he took Ana’s hand with a sharp smile and asked,  “When?”

A few months later, they married in the city courthouse and moved to Texas. Her mother did not cry like mothers usually would. She waved from the doorstep with the fixed frown and acidic scowl that filled most of Ana’s nightmares. Inside the vented omnibus, Ana assessed their goodbye, replaying her mother’s last words —if they had been words at all. They felt like bullets striking her chest, yet when she looked, there was no blood, no wound.

“Further hell you’ll have with this one,” she had said, “when the blows come, don’t come back here crying. I don’t want a daughter of mine running around loose like a whore. Do you think you can do as you please because you’re going away? God’s eyes are everywhere. He knows what you do. He knows what you think.”

West Texas was different from California, a scorching, arid desert. The place where they arrived was not a city at all and had barely a few businesses. Luis found a job packaging frozen dinners and they rented a room at an acquaintance of his father’s named Jose Segura, a short, overweight, and almost entirely bald man. Jose lived with his wife Linda, a kind and soft-tempered woman who was almost completely blind. Ana felt compassion for Linda, who spent the day between shadows and dishes, tending to her fat husband who did nothing but sit on the couch and drink. The women immediately empathized. Two souls confined by the misery of their circumstances, desperately seeking the light.

Luis worked 12 hours a day packing TV dinners for the social club members who walked down the park on Sunday afternoons while he and Ana ate boiled egg sandwiches. At night, in their tiny room at Mr. Segura’s, Luis was so tired and overcome with despair that he would drop himself on the wooden bed and close his eyes, unaware of Ana’s silent cries. Insensible and blind to the increasingly overwhelming solitude that invaded his wife and chewed her insides like moths. Unaware that while he spent the days among the rows of cryogenically frozen meals, Jose Segura spied on Ana. His advances soon went from simple, depraved espionage to a cynical and indecent proposal.

“Your husband is not here,” he said, taking a strand of her thick ebony hair between his pink fat fingers. “Linda is busy, you know, she and her things. You and I could go out for a walk.” The man stared at Ana with glassy eyes, his smile confusing then disgusting her. Horror seized her. She dropped the shovel and ran inside the house, locking herself in her bedroom to cry. She did not have the heart to tell Linda. That night, while their landlords slept, she resolved to speak to her husband about the matter.

“I’ve caught him spying a couple of times, but now it’s different, Luis.” He eyed her suspiciously. She mistook his silence for unexpressed indignation, then was utterly surprised when he shot back a load of reproaches.

“You’ve provoked him, Ana. Women must show self-respect. Didn’t your mother teach you that? Look at you.” He led her to the mirror. “Cover that cleavage! How could Mr. Segura respect you when you walk around the house dressed like a prostitute. You probably made a scene. How will I fix things now?  I don’t even have enough to pay for the month. If only you had behaved.”

Stunned, she apologized in the same inaudible mumbles she used when her mother censured her. Not because of guilt, but because something extraneous made her feel evil, sinful. She recognized her mother’s loathsome scowl in Luis and feared him. She knew that their tense economic situation had soured his spirit, yet she couldn’t understand how he had changed so quickly. His grin, now hardened into a straight line, looked more like her mother’s.

A month later, Luis lost his job. He drank almost every day and was rarely conscious. Ana had found a job at a meat company where she finally felt free from Luis’ scrutiny and Mr. Segura’s vile insinuations. She’d spend the days numbed inside the winter of the ‘cold room,’ cutting T-bone steaks, thinking of anything but Luis, his complaints, and the frustrations that made her feel terribly guilty of all their problems. Yet something within, a small, almost inaudible voice, seemed to whisper in the wind that this could not be her fault, that Luis’ change could not be her responsibility. Ana knew that her work at the meat company made Luis feel inferior, jealous, and insecure, but she could not bear seeing him sunk by mediocrity. Her work had made her regain a sense of purpose, and she was beginning to feel that life had more to offer her.

One afternoon, when she returned from the meat company, Luis, consumed by alcohol and anger, pulled her by the arm and pinned her against the kitchen sink.

“Damn bitch!” he yelled at her. “That’s what you wanted the job for. To see other men? You are just like all women. I don’t know why I didn’t leave you with your mother in that house, poor as you were.” Ana looked straight into his eyes without fear and felt compassion for him. His words were only an echo of her mother’s prophecies and they could no longer hurt her.

In the few times her mother had written, Ana learned to understand her and forgive her despotism and cruelty. Then, slowly, her mother’s voice became more and more distant and invisible. Ana began to realize that she could erase the hell her mother had preordained for her and rewrite her destiny. At least, that’s what George Guerra would always tell her- that she had the power to rewrite her life. George Guerra was Ana’s supervisor, a divorced man ten years older than her who had survived the Vietnam War and now spent his free time playing golf with other veterans. He was humorous, charismatic, and spoke Spanish worse than Ana did English.

While it was obvious to everyone at the meat company that he had a special interest in Ana, he was always respectful and patient, a welcoming respite for her. George had not met Luis, but had seen him when he’d pick up Ana after work in his old, pitiful car.  On more than one occasion, George had suggested to Ana that Luis was not the right man for her. Love by force, he said, could never make one happy.

One afternoon, George found Ana pacing in the break room, her eyes reddened by indignation and tears. He sat her on a chair and began to smoke, as he used to whenever he sensed that something was perturbing her. Then Ana began talking; she told George about her discussion on the phone with Luis and how he had threatened to go back to Mexico City and abandon her.

“And you don’t want him to leave or you are afraid of being left alone?” he asked, releasing a puff of smoke.

Ana looked at him, her huge black eyes puzzled. Did she still love Luis? Had she ever loved him at all? She had loved him once, surely, when everything was different- when he was different. “I don’t know,” she finally answered.

“The truth is, you are still afraid,” George replied, “Your head is full of prejudices. You think your husband will abandon you and that you will be alone, but you haven’t realized your strength yet, Ana.” His words shook her.

“So what if you get divorced or if Luis leaves you. What will happen then?” Ana observed him in silence. Outside, a thrush flew happily across the clear August sky.  “Ana, there are ideas that are deeply seeded and are hard to uproot, but when something is rotting us within, we must free ourselves from it before everything ends up decaying.”

That evening when Ana got back to Mr. Segura’s, she found Luis, his feet on the couch, flipping through TV channels. She did not look at him. Instead, she went directly to the bedroom. Inside the solitude of the small room she shared with her husband, Ana replayed her conversation with George Gerra, his words paralleling the light fluttering of the thrush outside the breakroom window. Now she felt her own wings beginning to emerge.