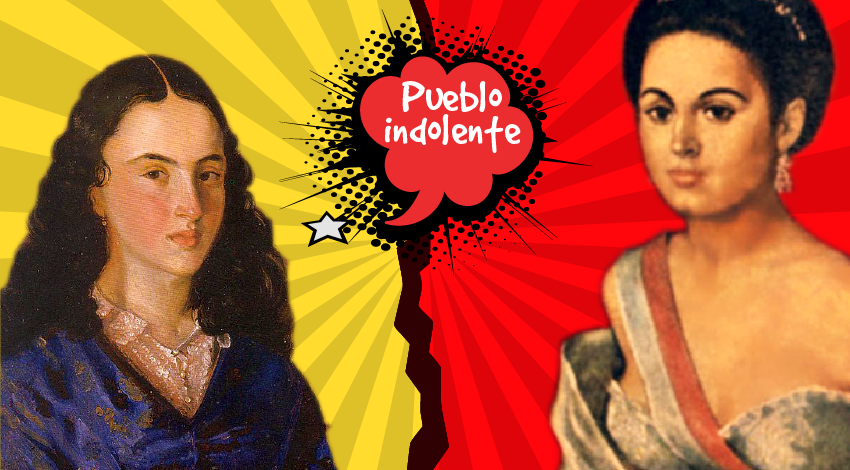 They call me La Pola. Only now, walking towards certain death, it occurs to me that I don’t know why.

I’m kind of glad today is going to be my last day. The words sound harmonious. Dates don’t always have the ring of a good verse, but today does. “She died on November fourteenth, 1817, at nine in the morning, in the middle of la Plaza Mayor.” It is an agreeable sentence. Of course, if tales are ever told about me, they’d have to mention the six other prisoners that are about to die by my side. And Alejo. He too will die today. But he probably has his own story. He deserves his own story.

I’m being escorted by two priests. There’s a guard guiding us, too. My hands are tied. The rope carves into my skin. I resist the temptation to look down at it. By no means can I let my jailors know that they are hurting me this way. That’s nothing compared to the real pain they have caused me and my people. I want them to know, for better or for worse, what their true crime is.

I never knew when I started working as a seamstress that I’d be here today, walking towards certain death. Catarina, my older sister, had married Domingo García and taken my brother Bibiano and me with her. We lived in Guaduas then. There was a road there that seemed nothing short of magical because it could take you to the Magdalena River, and beyond the river to the Caribbean Sea. So, a lot of life passed through home. I don’t really remember when I realized my family was part of the Revolution. I just know that one day I found myself enrolled in it, too —and I loved it.

A call to arms was ringing in the very fabric of the air, and we answered. Because, whether La Corona likes it or not, we have voices, and voices need to be heard or they’ll scream louder.

When we die, Alejo and the other men’s bodies will be paraded through the streets, exhibited to scare any possible young, bright minds who could realize they can pick a side in an unjust war. I will be spared that last humiliation, for I am a woman. I have dignity enough, though, to suffer whatever they would throw at me. I am brave enough to be stripped of all my freedom, like they have done. Then why should they reserve their last torture to the men? Not even my lifeless body has the same importance to their eyes as the ones of my comrades. We, women, cannot serve in wars. We have to become servants, cooks, seamstresses, like me… or wives. Alejo and I have not married. We will die nothing more than profane lovers to a stranger’s eye.

I didn’t become a seamstress to become a spy. I take already existing things that people don’t like as much as they used to and I transform them. I adapt them to please.

That’s why I became a spy. Because I am sick and tired of the life La Corona has forced us to live, this impoverished life that is not our own, that seems to belong to somebody else. Once, while I was joking with Bibiano, I told him we were both the seamstresses of our future. He laughed along, but I believe the remark got into his head. He never again mocked me for my job: on the contrary, he pointed out on more than one occasion that if it wasn’t for what I do, we wouldn’t have this or that piece of information. I believe I brought him to his senses.

Four days ago, we were taken to the Council of War and sentenced to execution by firing squad. Alejo and I looked at each other during the whole affair. It was an awfully quiet ceremony. The room felt cold for no apparent reason and the thick walls muted every noise coming from outside, as if we were now apart from the real world.

War is supposed to be an honorable thing. It felt like that for me, I am sure. Fighting back is honorable; but attacking, never. They have attacked us. They are everything but honorable, for they have it all and still they want more. They want what’s ours to fill up their pockets and satisfy their thirst.

I, myself, am pretty thirsty. I was swearing the whole night through, and the cold air that comes down from the Eastern hills seems to have dried up my throat. They threw us in a cell that used to be a classroom. I couldn’t help but read into the metaphor. I cursed the Spaniards and their insatiable greed, while we are starving and dying and falling down. At some point I felt myself stop, even though my mind kept going relentlessly. All of a sudden, one of the guards had a glass of wine in his hands. He passed it to me through the bars of my cage. My throat was sore, and it hurt quite a lot from all the shouting. But I threw the beverage back at him.

They’re going to tell us to turn our backs to the rifles at la Plaza Mayor because that’s how traitors are executed. We’re traitors. We will die as such.

My speech isn’t improvised. Some people will think it is, because I spent the night in a cell and I’m about to be killed by gunfire in front of a crowd. I have other things on my mind than a speech. But I didn’t plan it, either: I didn’t need to, because being assassinated for trying to get my country and my people a little bit of freedom was inspiration enough. I am condemned for having hope, for fighting for hope. I am awake: I see the puppeteer, the strings attached to our arms and legs and heads and minds, and I cut mine off. But they don’t disappear. Instead they get tangled around my neck and hang me. To be free now is to die.

“I have more than enough courage to suffer this death and a thousand more.” That is my speech.

“Do not forget my example.”

My father called me Apolonia. My family calls me Salavarrieta. When I had to flee from Bogotá, my passport read Gregoria Apolinaria. When the armed forces in Guaduas first put a target on my back, I called myself Policarpa. They call me La Pola.

I’m turning around as a group of uniformed Spaniards fire their weapons. I have an undying fire in my hands, and I want to light everybody’s candles with it. The wax will melt, and it will be moldable. It might burn our fingers, but we will not care. For we have an undying fire in our hands. Call it what you want: freedom, hope, courage, honor. I call it Revolution, but that’s not its true name.

Call me what you want. I am a seamstress, a woman, a spy, a revolutionary, a traitor.

Call me what you want. I am dying now, but I have a story to tell you. Come here, as close as you can.

Call me what you will. They call me La Pola.

Policarpa Salavarrieta is Colombia’s most renowned heroine. According to BeLatina, women were vital to the decolonization of Colombia from Spain. Policarpa, known as “La Pola,” is the woman who stood out. Her upbringing was politically charged due to multiple family members participating in the fight against the colonization of Colombia. As a professional seamstress, she was able to become the official seamstress for the Spanish royals —making her a spy! She was eventually caught and sentenced to death on November 10, 1817 and on November 14, she was arranged to be executed. For more information on La Pola, read BeLatina’s profile!

This story was updated on Nov. 16 due to a correction. The story mentioned events took place at the Plaza de Bolívar, however, in 1817 it was known as la Plaza Mayor.