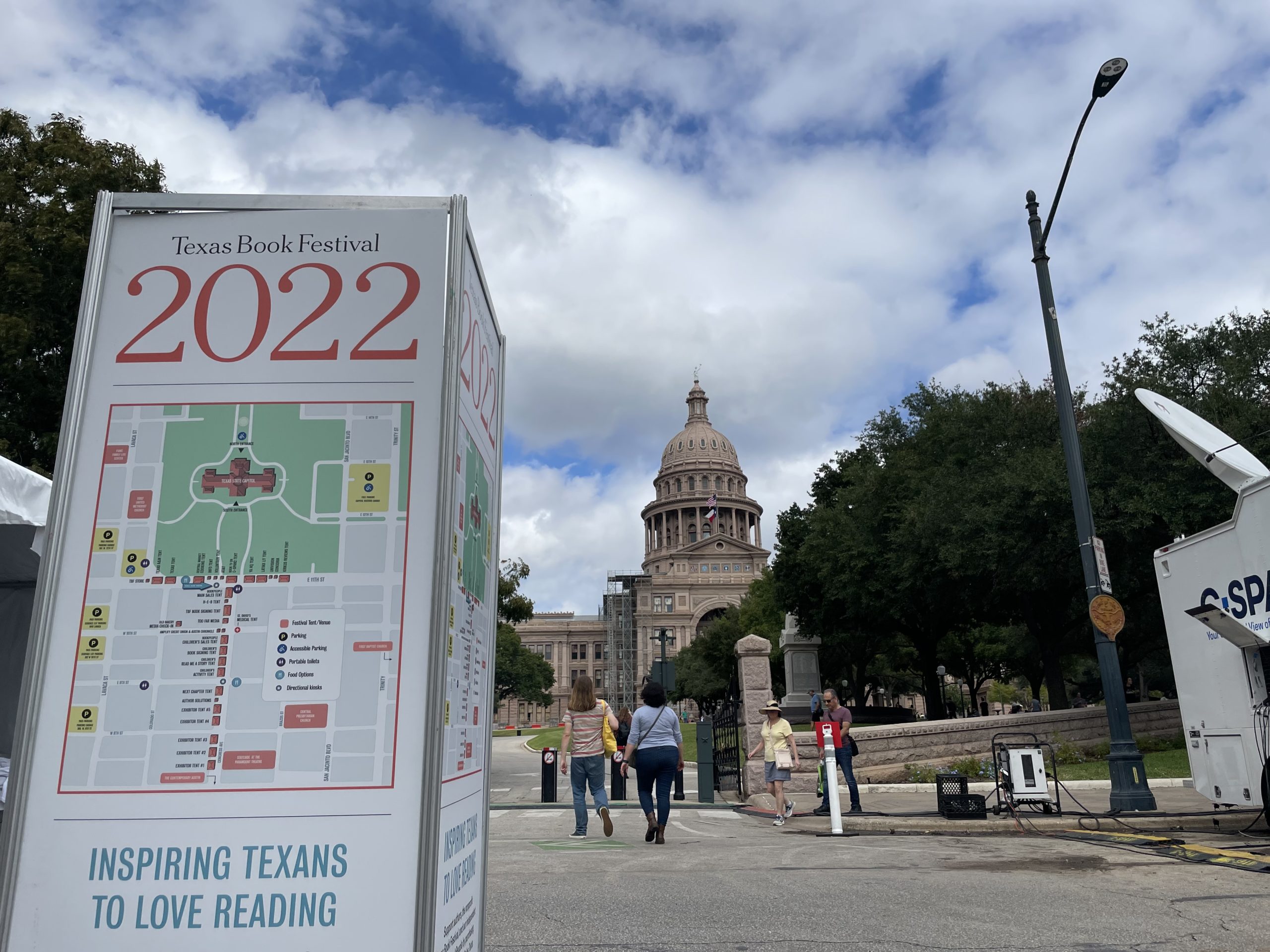 This past weekend the streets surrounding the Texas Capitol were packed full of avid book readers, well-known authors, and established news outlets as the 27th annual Texas Book Festival went on without a hitch. Originally founded in 1995 by Former First Lady and Librarian Laura Bush, the Texas Book Fest was established to help connect authors and readers as well as nurture Texans’ love of books. In the years since its inception, Texas Book Fest has grown to as many as 300 authors, drawing in over 50,000 book lovers annually, and hosting over 120 panels throughout the weekend. The entire event is free and even has separate programs with panels for adults, teens, or children.

While there are many events taking place simultaneously, Day 1 for Latinitas Magazine began with a 10 AM panel on Graphic Novels for Young Readers titled Graphicon. The panel was located in the First United Methodist Church near the Capitol and featured Amy Kim Kibuishi, author of “The Rema Chronicles: Realm of the Blue Mist”, Jamar Nicholas, author of “Leon The Extraordinary”, Christina Soontornvat, author of “The Try Out”, and Dan Santat, author of “The Aquanaut” as well as the moderator for the panel. The panel gave an in-depth look at the authors themselves, their various interests outside of writing, and what drew them specifically to the medium of Graphic Novels. For Jamar Nicholas, it all began when he was younger, “I found my way into Marvel Comics…I fell in love with [the] dynamic page layouts. They were so abstract, legs sticking out of panels, and it was very loud.” While working at a local college, Jamar found himself drawing full-page comics during his free time. Despite not attending, the school’s newspaper even began publishing them.

Amy Kibuishi’s new graphic novel series “The Rema Chronicles” was a long time coming, “I had the story since I was like 12. I had this dream, and it was during a very difficult time in my life. I just kept wanting to go back to it, and I knew this story might help other people so…I wanted to do that story justice.” She spent the better part of her life sharpening her visual and storytelling skills, gaining experience as a writer, all the while never forgetting about the story she wanted to tell. Now, after nearly 3 decades, she’s excited about the recent release of the first installment in her 5 book series.

Considering the panel was about graphic novels, Dan Santat asked the rest of the authors how they felt about teachers or other parents discrediting the medium, telling kids they need to read “real books”. Christina Soontornvat had a great response, “What’s the point of reading? What’s the point of literature? It’s to feel moved, to be transported, to feel empathy, to get connected to other stories. If you can do that in a graphic novel, that counts as literature.” As the panel came to a close, the authors headed towards the church basement for a book signing that was open to the public. In the hallway directly outside of the original room Book People, the official sponsors of Texas Book Fest, had a booth set up where the books the authors were there to promote were available for purchase.

The day continued with an 11 AM YA panel held in the HQ YA Tent called From The Heart: Modern Romance, which was hosted by Sarah Pitre, founder of Forever Young Adult and head film buyer at the Alamo Drafthouse. The speakers included Lyla Lee, author of “I’ll Be The One” and “Flipping The Script”, Katharine McGee, author of “The American Royals” series, Kelis Rowe, who made her debut at Texas Book Fest as the author of “Finding Jupiter”, and Steven Salvatore, author of “And They Lived…”.  Romance is a broad topic, and there was lots of queer and POC representation on the panel.

For example, Lyla Lee, a Korean American writer born in South Korea, though currently residing in Dallas, Texas, is also bisexual. As such, the two main characters in her two YA novels are also Korean American bisexual girls, navigating not just their sexuality but also their sexuality as it relates to their culture. Steven Salvatore is a gay genderqueer author who wanted to explore the realities of experiencing all those romantic “firsts” as a queer person, and how a lack of education and Sex-Ed can affect queer youths. And Kelis Rowe is a Black female author who read many young adult love stories featuring Black teens but never saw a story that related to her own, so she decided to create it.

This panel was chock-full of information, as there are so many different facets when it comes to writing romance. Sarah Pitre inquired how the authors were able to find a balance between romance and reality, and for Katharine McGee, that balance came naturally, “I’m here on a romance panel, there’s a lot of romance in my books, but my books are not traditional romance in the sense of you meet Character A you meet Character B and you know they’re gonna end up together, and can’t wait for their happy ending. You don’t know they’re gonna have a happy ending in my books…Some people end up together and they break up in Book 2 and then my fans get mad, and I’m like sorry. Did you ever break up with a boyfriend? That must happen in life. I think it’s been a lot of fun for me to kind of play with yes, you can be a princess and have a fairytale romance, and then it ends. And then you’re alone for a while, and maybe you find somebody else, and maybe you don’t.”

Given the panel is also YA, there’s been a lot of discourse in the world surrounding what level of intimacy is appropriate for young adults to read. So much of YA Romance books have a PG-13 mentality when it comes to what they cover, but Steven Salvatore wasn’t scared to go against that, “In literature in general and entertainment and media, anytime there is a queer couple it’s always ‘Oh, they’re gonna kiss, fade to black’, let alone any sort of sex. Especially growing up, any sort of Sex-Ed that exists in schools…queer kids don’t know what safe sex looks like, they don’t know what consensual sex looks like, they don’t know anything beyond what they find out as they get into those spaces, and that could be really dangerous. And so, I was ready to be like ‘we are not doing Fade To Black, we are going for it’ and my editor was very much on board. So that was an important aspect.” Though it certainly helps Steven Salvatore’s book takes place while the main characters are freshmen in college, and not high schoolers.

Once the panel was done, the authors headed over to the Book Signing Tent to sign the very books they’d just spent an hour speaking about. Those books were available for purchase not in a nearby booth, but at the Book People Tent, which held every book every single author invited to the event had come to promote, along with additions in their works.

The last event of the day for Latinitas Magazine was the Antología 2021 Premio Mujer Titana panel beginning at 1:45. In 2021 the Latino Arts, Culture and Education Organization (LACE) and Spanish-language publication “La Revista Mujer“ joined forces to put on a poetry contest called Premio Mujer Titana 2021. Contestants were to submit their best pieces of poetry for a chance to make it into the first ever Antología set to be published the following year. Well, the Antología is now out, and the panel was packed with the authors who’s poems got to be featured in it; Sandy Fernandez, Ana Veronica, Sally Acevedo, Julieta Corpus, Alba Letycia, Karen G, and Blanca. The panel was located in the Latinx Lit Tent and the entire event, from the moderator to the responses, was spoken fully in Spanish.

The writers from the Antología are women from all different walks of life, living in different parts of Texas. While the collection itself has over 45 poems, the seven authors that were able to make it each got to read off a snippet of their piece. Blanca, a nanny and grandmother, read a section from her piece titled “Mi Nieto” that speaks on her hopes and wishes for her grandson and his future. Julieta’s poem “Cuando Me Muera” flips the dismal topic of death on its head, with Julieta urging her family not to cry, but to celebrate! Drink and reminisce on the beauty that is life. Sally, the only Puerto Rican on the panel, wrote about transformation in her poem. Questioning the meaning of life, and speculating on why we have to, and should, constantly change ourselves and enter new phases.

At some point during the discussion the moderator asked the women, who all throughout the panel were expressing deep gratitude for being invited, why it’s taken so much for them to call themselves poets. While some had logical answers, like Karen who works in tech and views herself as a Project Manager more than an author, others, like Sandra, had a different take, “Siento que nosotras… si, luchamos con eso, porque constantemente nos criticamos [a] nosotras mismas. Nuestros estándares como mujeres, y como latinas, son muy altos. Entonces cuando nosotras escribimos algo aunque hay personas que vengan y nos digan es algo bueno, ‘esta super tu poema’, nosotras todavia no vemos ese nivel. Si para mi fue bien difícil creérmela.”

These are women who’d worked their entire lives, most giving up their creative dreams for more practical careers, and never ever thought they’d be published. Many of them expressed how surreal and gratifying it was to even be holding such a book. While 2022’s Premio Mujer Titana poetry contest just finished taking submissions this past October, you can still join LACE and “La Revista Mujer” at the award ceremony November 17 at the Emma S. Barrientos Mexican-American Cultural Center and watch the winners receive their honors. You can buy tickets here.