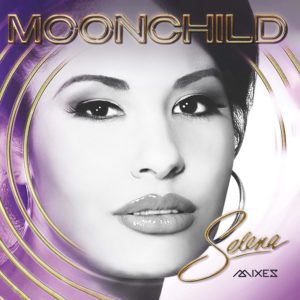 I have to admit, when I found out I would be reviewing Selena’s first real album release since her passing in 1995, I didn’t have high hopes. Personally, I’ve always found using someone’s voice or likeness after they’ve passed to be in distaste. It makes me uncomfortable, and I often viewed it as a cash grab, profiting from an untimely death. Though considering “Moonchild Mixes” came straight from Selena’s family, in collaboration with Warner Brothers Latina, I should have had more faith. “Moonchild Mixes” is nothing short of a masterpiece. A heartfelt homage to Selena, it’s a look into where Selena would be today and how these songs would sound now. It adds to her discography, it has a clear purpose, and accomplishes what it set out to do beautifully.

There are no new or original songs, thankfully. Instead “Moonchild Mixes” modernizes the lesser accessible songs from Selena’s catalog while managing to somehow keep the essence of them. It’s an enhancement, using current editing techniques to add more dynamics and proper leveling, so while the songs feel the same, it’s easier to listen to. Modernized. Perhaps the most jarring part of the whole endeavor is Selena’s voice. Most of these songs were recorded when Selena was just a teenager, and while there’s something hauntingly beautiful about that, Warner Brothers and the Quintanilla Family used audio pitching and voice mixing on every song to mature Selena’s voice. They wanted it to sound like how it would if she were alive today, and they succeeded. As Selena’s father, Abraham Quintanilla told NPR, “It’ll make you think that she recorded the songs this morning.” And he is not wrong.

The album was created with the intent of contemporizing the songs, and there isn’t a better example of that than the most well-known song off the album “Como Te Quero Yo A Ti”. While most songs off the album only have one new version, CTQYAT has three. What I would consider their remastered version of the original “Regional Mexican Version”, then there’s the upbeat “Cumbia Version”, and lastly, my favorite, the “Como Te Quiero Yo A Ti Pop Version”.  Popular musicians are always reimagining their songs, and finding different ways to perform them live, so this variation tries to imagine how Selena would approach this song from a pop lens. And while someone who grew up in the early 2000s like me has a very different definition of “pop song”, the “Moonchild Mixes” version stays true to Selena’s own tastes and genre stylings. The current pop version sounds a lot like her other pop hit “Dreaming of You” with its atmospheric background instrumentals, and mellow R&B beat. If that sounds sort of disconnected from the original version I implore you to listen to this one, it is so incredibly good.

There is one other song that gets more than one version and that is “Dame Tu Amor”. The song has the typical version that sticks to the original, but then there’s “Dame Tu Amor Cumbia Version” and that is an absolute banger. A certified bop, with its party like high hats and Latino instrumentation, you can’t resist getting up and dancing. In fact, there are a bunch of songs I hadn’t heard before that I ended up loving. Something I noticed about “Moonchild Mixes” is that a lot of the songs chosen were lesser-known songs that weren’t as easily accessible and hadn’t really been given the proper time to shine. For example, the song “Salta La Ranita” isn’t even on streaming services outside of this version. Other songs like “Cariño Mio”, “Corazoncito”, or “Pensando a Ti” get a little stagnant in their original versions. The potential for those songs is there, and Selena’s voice kills it, but the instrumentation itself gets a little repetitive. That potential is fully realized in their versions on “Moonchild Mixes”. The album does a great job of adding in those dynamics and perfect endings so the songs never feel like they drag on. Instead, it gives a second wind to songs that otherwise might have been left in the dust.

Prior to listening to this album, I was worried it would serve no purpose. That, outside of being a collectors item, the project itself wasn’t really going to add much to Selena’s own prestigious catalog. But I was so wrong. “Moonchild Mixes” is a true addition to all her music. For starters, the songs and their reimaginations are great.  They’re catchy, and the newer versions are able to capture that original spark, but build upon it for an easier listening experience. Then there’s the accessibility. Some of these songs are really hard to find, only accessible if you download the YouTube MP3 file or convert them from a CD. However, by choosing to adapt lesser-accessible songs, the Quintanilla Family is giving back to Selena fans everywhere. Giving them the opportunity to listen to her music with ease, and bringing some of these songs into the modern day.

I truly enjoyed reviewing this album, and I will certainly be bopping along to all these tracks! Standout tracks for me, in addition to the ones I’ve already mentioned, are “No Llores Mas” and “Sabes”. Absolutely incredible songs. If you care to check out “Moonchild Mixes” you can find the album, out now, on all streaming platforms.