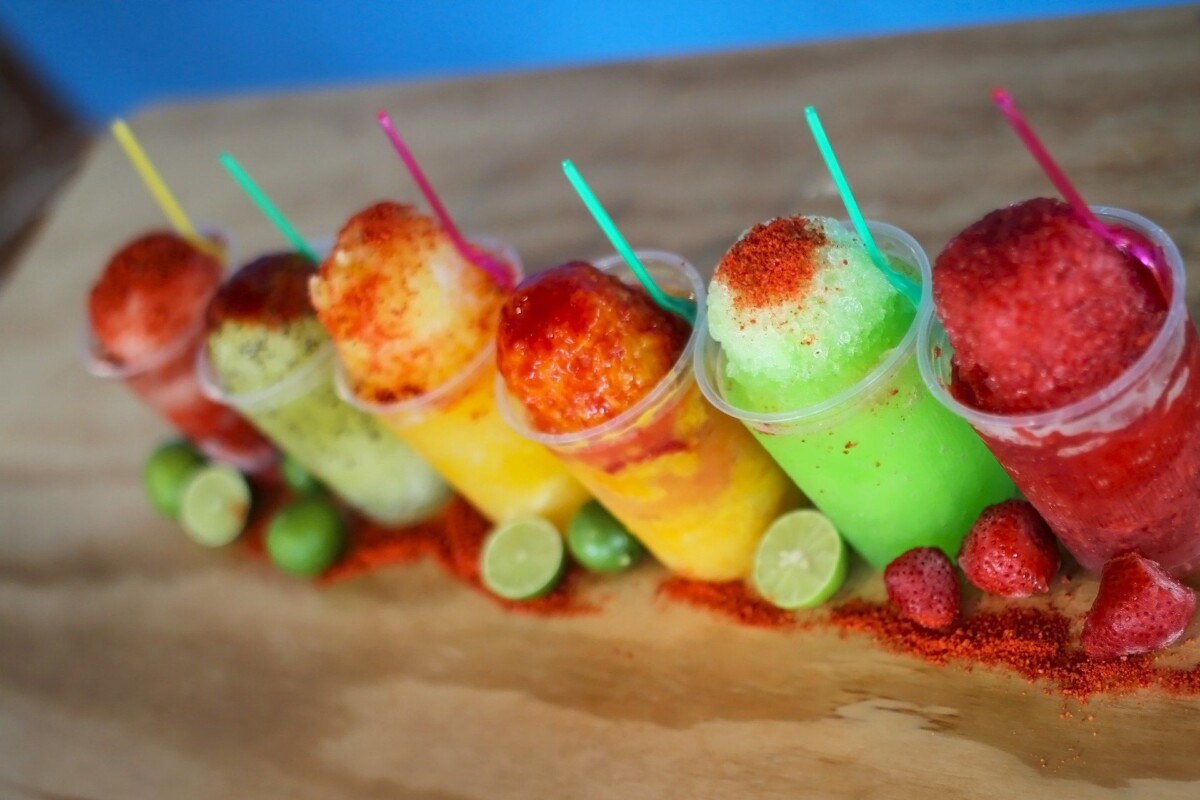 The following is a transcription of Latinitas Magazine’s latest audio story “Raspas, Raspas.” Volunteer writer Jackie Ibarra gives a rundown of the history of raspas, a timeless Latin treat. You can listen to the audio story on SoundCloud!

Ah, there’s nothing better than hearing the chiming of the bells from the raspa man’s ice cream truck rolling through the neighborhood on a hot, dry Texas day.

You’d grab whatever change mom would give you and run-up to the white truck analyzing all the hundreds of pictures of ice creams on the side of the truck, just to end up picking the same thing – a cold, juicy raspa.

But where does the sweet treat come from?

The story of raspados or raspas shouldn’t be confused with snow cones. Although they are similar, most will tell you that raspas just have a little bit more “ooomf” and a little bit more culture to them. As Tim Vanderpool said, “snow cones are to raspados what frozen pizzas are to Italian cuisine. They might as well exist on different planets.”

The story of raspas starts with the Teotihuacanos, a civilization from what is now known as San Juan. They would walk to the tops of volcanoes, gather snow, and mix it with honey and fruit to add sweetness. But since people had to get the snow from the very tops of volcanoes, bring it all the way down, and had to get it insulated, the treats were usually reserved for people in power.

But what do you call them? Well, that all depends on where you’re from.

I grew up in San Antonio, Texas – in the heart of the South Side where raspas were the universal language for dessert, and hearing the raspa man coming down the street meant a race between my brother on who’d get there first.

Versions of raspas exist all over the world. In Puerto Rico, they’re called piraguas while in the Dominican Republic they’re called frio frio. If you find yourself in Cuba, the frozen treats are called granizado but if you’re in Peru, it’s called a raspadilla.

But Jose Luis Martinez, a journalism student from Houston, Texas who was born in El Salvador, it’s a different story.

Jose: “Yeah, so we called raspas minutas.” 1:17: “Since forever since I was little. Since I mean, I guess since I first ate a minuta, that’s just what I’ve been calling them.  It’s funny because all my friends think I’m saying minuto, but it’s minutas.”

Jose: “The cool thing that I liked about like when I was younger is that all my friends would live literally next door or literally across the street. Now that’s not the case. But I would always text my friends like with those little phones that we had, like the ones who had to press the number three times to get to a letter like that to be like, like, ‘hey, like we got to go get it like like the serbete man is here’ and that was always fun, just and then we’d get the snacks and we just hang out after like, they’re on the block. It was really cool.”

Jackie: But for Luis, minutas aren’t just a dessert for a hot summer day in Houston. It’s a reminder to stay young at heart, even in a stressful world.

Jose: “So I’d definitely say minutas, minutas aren’t just, you know, styrofoam cup with ice and flavoring. It’s definitely like, I would say like, friendship. That’s what I would say friendship and like, just youthful times. And I feel like everyone should have a minute every once in a while to just remind themselves about, you know, how life used to be and honestly, how we can still be young at heart.

Jackie: Nadia Briones, an athletic training major from San Antonio, Texas sticks to calling them raspas. She also finds herself connecting the dessert to heartfelt memories with family.

Nadia: “It’s this time when I was in Mexico, me and my family went on a vacation to San Luis Potosi and there was this man on the side of the road. And he just had like this big old brick of ice and a scraper. And he just scraped the ice, and added like, a syrup. And I remember it being super super hot that day. And the moment like that we had that it was so nice. It was so fresh and I don’t know why this is where it takes me, it takes me back to when I was in San Luis Potosi on vacation with family.”

Jackie: Nadia attends Ohio State University in Columbus, Ohio. That’s about 1,313.9 miles away from her home and family in San Antonio. So holding onto raspas and those memories have helped her hold onto her family even when she’s so far away.

Nadia: “Ahh the best time was when I knew that I was guaranteed something from the ice cream man was when my mom had just gotten out of work. And like she was getting off her truck because she keeps her spare change in her truck. And once I see the ice cream man, I’m like, ‘Ma, I know you got change in there. I know you got change in there.’ And like she would have to give it to me and I would get something out when I…that one I remember”

Jackie: Besides the memories and the deliciousness, raspas aren’t just ‘Mexican snow cones” Nadia says. They’re so much more.

Nadia: “It’s warmth, it means warmth like, even though it’s really cold. It’s still warm. You know? It means familiarization means culture and those memories as family memories.”