SXSW 2022: Lessons in self-love and taking the first step 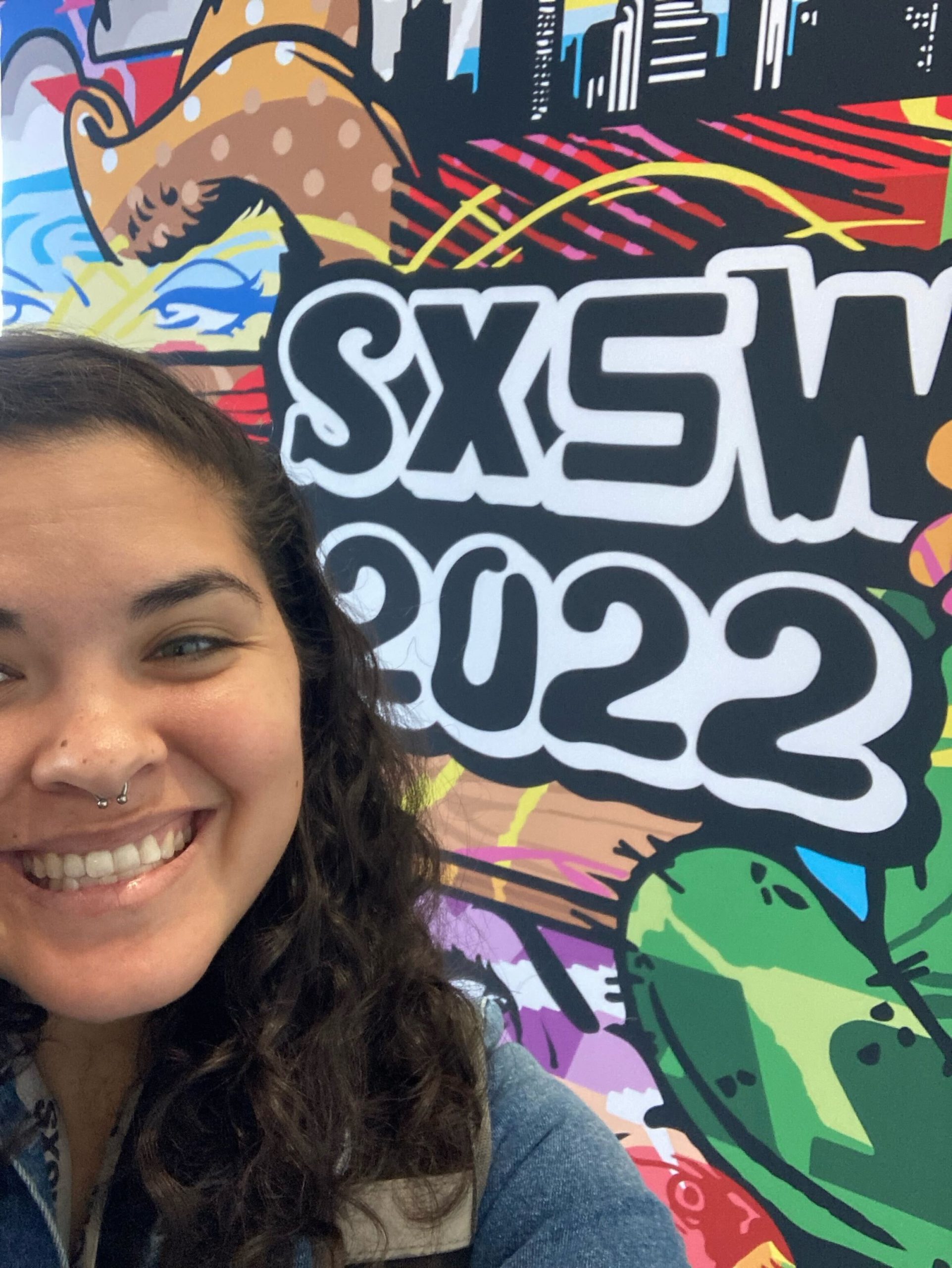 This year’s SXSW was a combination of technology, teaching, training, and tempting sessions. Every evening I scrolled through the next day’s activities and seminars, and I found myself overlapping my schedule with a mixed texture of new music, art, film, experiences, and innovation. It was overwhelming but absolutely electrifying. My first decision of the week came easily with the premiere of Brene Brown’s “Atlas of the Heart”, a series focused on emotion and storytelling. Her exploration of feelings like anguish, wonder, and grief were the perfect way to begin my SXSW experience. Plus, Brene herself came out to answer questions about her detailed research into the human experience.

With my heart full of wisdom, I moved on to a different stage. John Cleese, of Monty Python fame, sat on a panel of fellow comedians like Dulce Sloan, Jim Gaffigan and Ricky Valez—detailing his experience with sketch comedy and the nuances of British humor. His storytelling, timing, and rapport with the other panelists lit up the room and made the walls shake with laughter. But I found that my favorite part of the evening were the people I met while waiting for the show to start: the owner of Ester’s Follies, a Berlin resident originally from Taiwan, an Austin photographer looking for the perfect shot—the entire audience was a mixed bag of stories and backgrounds, embodying the beauty of SXSW.

Off and running, I was able to check out sessions with actors such as Jensen Ackles, Christian Slater, and Ethan Hawke—all of them discussing new and exciting projects that ranged from podcasts to animated spin-offs. I visited the Wellness expo and sat in on a conversation about human connection with new author Simone Heng, discovering that “Human Connection Specialist” is a possible job title. I sat in on a podcast recording for A Little Bit Culty, a discussion of patterns in cults and cult-like groups ranging from Jonestown to SoulCycle.

In a later session titled “Transform your Relationship with Ancient Wisdom” with Carey Davidson, I learned through a thorough survey that Earth is the element that best represents my personality. I also learned that Earths are the most susceptible to joining cults. I think that’s one of the other beautiful things about SXSW: the ability to understand new perspectives and outlooks is an essential part, but there is also an understanding of self that comes into play.

Nowhere was this lesson more apparent and tangible than the keynote speech from Lizzo. I waited over an hour and a half to sit less than one hundred feet from the three-time Grammy-winning pop star. And it was worth the wait. Her entourage was a smattering of dancers, social media experts, friends, and press, all of them dressed to impress and as diverse as they could be. Sitting one row behind them, I felt their excitement to see their peer and icon not perform, but share the room with attendees.

When she walked onstage the room erupted in applause and joyful cooing. The audience was floored and flooded with Lizzo’s presence: the queen had arrived. Sitting with iHeart Media’s Angela Yee, Lizzo detailed her current projects including mastering her album and the new show “Watch Out for the Big Grrrls,” an Amazon Prime television show that features performances from “dancers that look like [Lizzo].” Tearing up, she confessed “this is like a dream come true…I needed big girls, more than I needed a television show.”

As an executive producer, Lizzo worked to “change the narrative” and was able to create a positive and supportive environment that contrasts some of the more popular cutthroat reality television shows. But even in that context, she admitted to having some vulnerable and sensitive moments with the cast and her own insecurities. Even though she chooses to remain positive, she acknowledged that sometimes even body icons have bad days.

In that spirit, she encouraged the audience to join her in a set of affirmations. With call and response, audience members were asked to say “I love you, you are beautiful, and you can do anything” to their neighbors, their friends, and most importantly themselves. As I closed my eyes and whispered, “I love you,” I was surprised to find myself choking up. This small act of self-love hit me hard in the best way possible and I knew that I had to take Lizzo’s practice in my day to day, far beyond SXSW.

With Lizzo’s words and confidence sitting in my bones, I sprinted through the rest of the week with an eagerness to make every day count. When would I have this opportunity again? Every chance I got, I popped in on new sessions, networking events, and exciting exhibits including a Banksy virtual reality experience hosted at Atmosphere.

I discussed disrupting leadership failures with speakers like Judith Rudge, Global Senior Director Talent Acquisition of Nike. I watched Mark Cuban speak frankly about the entrepreneurial spirit along with the co-founders of the company Bala, a designer fitness brand. Every new connection and speaker energized me and made me feel like I was making a difference in myself. And it wasn’t until the music festival that I realized that we were making a greater difference in the lives of others.

“This is a twenty-minute set, but we’re going to treat it like it’s a full-on rock show,” Ty Faizon from the BLACKSTARKIDS insisted to a room of maybe 50people. I had eagerly sought out the five piece band after seeing the end of their set at an event the day before. They were wildly entertaining, with their high energy performance and unique electric sound—I had to see their full set. But the only show I could go to was at midnight on a Thursday at Stubb’s indoor space.

Although most of the audience seemed sleepy, the BLACKSTARKIDS were not going to give in to the hour; they were ready for a show. Their song “TIME FLIES WHEN YOU’RE HAVING FUN” rang true after what felt like a brief stint onstage. In their final bars of ringing guitar, I wondered how many followers they started with at the beginning of SXSW and how many they would walk away with. I was ecstatic to check their Instagram only a few days after the conference to learn that they would be playing Lollapalooza this summer in Chicago. Part of me wonders if it was the influence of SXSW that made the opportunity possible.

This same train of thought would follow me to every music show I attended: from Jade Novah, Zola Jesus, We Were Promised Jetpacks, and many more folks added to my Spotify library. Many of the artists I saw represented my own Latinx background such as La Doña, a queer feminist artist from San Francisco who unapologetically blasted cumbia at the Dr. Marten’s Showcase. The band La Sra. Tomasa crossed the Atlantic to share their unique genre of Spanish-funk.

But there were also performances that expanded my cultural perspective on what music could be, like HAEPAARY, a two piece South Korean group that blended traditional East Asian vocalization with rave and trance music. Every artist seemed to radiate confidence in the mission of their art but I still wondered what was beneath the surface. How many of these artists needed this festival more than I did? How many of them have new avenues opened up to them with every late night show or daytime interlude? How many of these artists will check “played SXSW” off their bucket list? I realized that I was making a difference in their lives as much as they were making a difference in mine, the final beauty I found in SXSW.

My final night of SXSW was a cacophony of new sounds and new faces. I found a show that included a band from my home state, North Carolina. Boulevards was advertised as a “pure funk” and stars the singular voice of Jamil Rashad. His denim clad band was the perfect backdrop for his “Electric Cowboy” aesthetic. With his booming voice, he commanded the room and made everyone sway to the rhythm.

But swaying and singing was just the bare minimum for Jamil. In their final song, this front man parted the crowd to create a single empty aisle. Swinging his microphone like a lasso, Jamil instructed the audience to use this area as a soul train-esque dance space. People were encouraged to boogie and buck down the way towards the stage, sending waves of embarrassed and playful laughter throughout the crowd. Some people simply strutted, some took the opportunity to show off their moves. With the soulful music and the shimmering moonlight, I found myself smiling at this merry display.

I knew that these types of moments would be rare in my life: complete abandonment and unique jubilation. It was a wild but definite feeling; I was happy. In that moment, I understood the magic of SXSW and the grief over its physical absence over the last two years. This was more than just a week of shows and celebrity spotting, it was a week of beauty, creative energy, and joyful noise. I took a page from Lizzo and whispered “I love you” as I walked up to the empty space, and I took the first step.