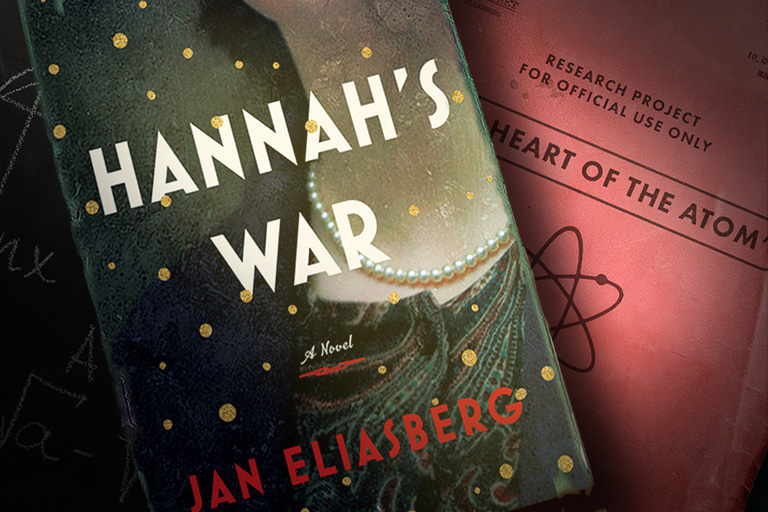 “Hannah’s War” is a gripping cat-and-mouse tale of love, war, deception, and espionage. It is a spy thriller full of suspense, and high-stakes. Jan Eliasberg does a wonderful job bringing a true story to life and highlighting America’s most complex moments in history. The story switches between Dr. Hannah Weiss’ history and life in Berlin during the rise of Nazi Germany, and her work in the U.S. during 1945 as she works on creating the first atomic bomb during World War II.

In her debut novel, Eliasberg uncovers the many secrets from World War II, and ties them all together in a neat, little bow. Dr. Hannah Weiss, an Austrian-Jewish physicist, was working with Julius Robert Oppenheimer during World War II, and she was sending encoded equations to Hitler’s scientists. However, Hannah was sending false equations, meant to lead the Third Reich, aka Nazi Germany, in the wrong direction leading them to fail to create the atomic bomb before the Western Allies.

Hannah, a brilliant scientist, was on the verge of discovering how to split an atom. But, because she’s a Jewish woman living under the Third Reich, her work is belittled and eventually stolen by her colleagues. Faced with an impossible choice, Hannah must decide what she is willing to sacrifice for the creation of the atomic bomb —a discovery that, if left in the wrong hands, could destroy the world.

Later, in 1945, Major Jack Delaney arrived in New Mexico with one mission: to catch a spy. He is convinced someone in the Top Secret Manhattan Project is a spy. Jack is immediately drawn to the mysterious and captivating Dr. Hannah Weiss who is now working on the Critical Assemblies Team at the Los Alamos National Laboratories, a nuclear weapons plant part of the Manhattan Project, in Santa Fe, New Mexico.

As Jack interrogates Hannah about her involvement with the Kaiser Wilhelm Institute in Berlin 10 years prior, and her relations with high-ranking members of the Nazi party, he begins to filter the lies from the truth. Jack discovers what information Hannah has been smuggling out of the facilities, and he finds out he and Hannah have more in common than either one bargained for. Once Jack discovers the truth from Hannah, he will do anything to protect her and her secrets.

Throughout the novel, the reader can see pieces of Hannah’s life —particularly, how she was treated as a Jewish woman under the Third Reich. Hannah is a strong, brilliant character with depth and uncovering her secrets is both delightful and frustrating, as there is always more to learn. Jack has a few secrets of his own, and, as those are uncovered, the reader sees that racism and anti-semitism was not only present in Germany, but throughout the world.

Eliasberg deals with difficult topics gracefully, and shows the moral struggle the physicists creating the atomic bomb felt —it was a heavy weight to carry. “Hannah’s War” was an astounding book, a story long overdue that needed to be told, and I am excited to uncover what Jan Eliasberg writes next.

Natasha Ford graduated from St. Edward’s University with a Bachelor degree in English Writing & Rhetoric with a minor in music. She currently works at BookPeople as a Assistant Kids Inventory Manager. She is passionate about childhood literacy and diversity in publishing, and believes there is one book out there to turn every child into a reader. Her work has been published in Latinitas Magazine, Austin Woman Magazine, and on the BookPeople blog. In her free time, Natasha loves doing yoga, reading young adult fantasy, and playing her with schnorkie, Bodhi. Find more of her book reviews on her instagram, @natreadstuff!