Not Your Ordinary Delivery Drivers 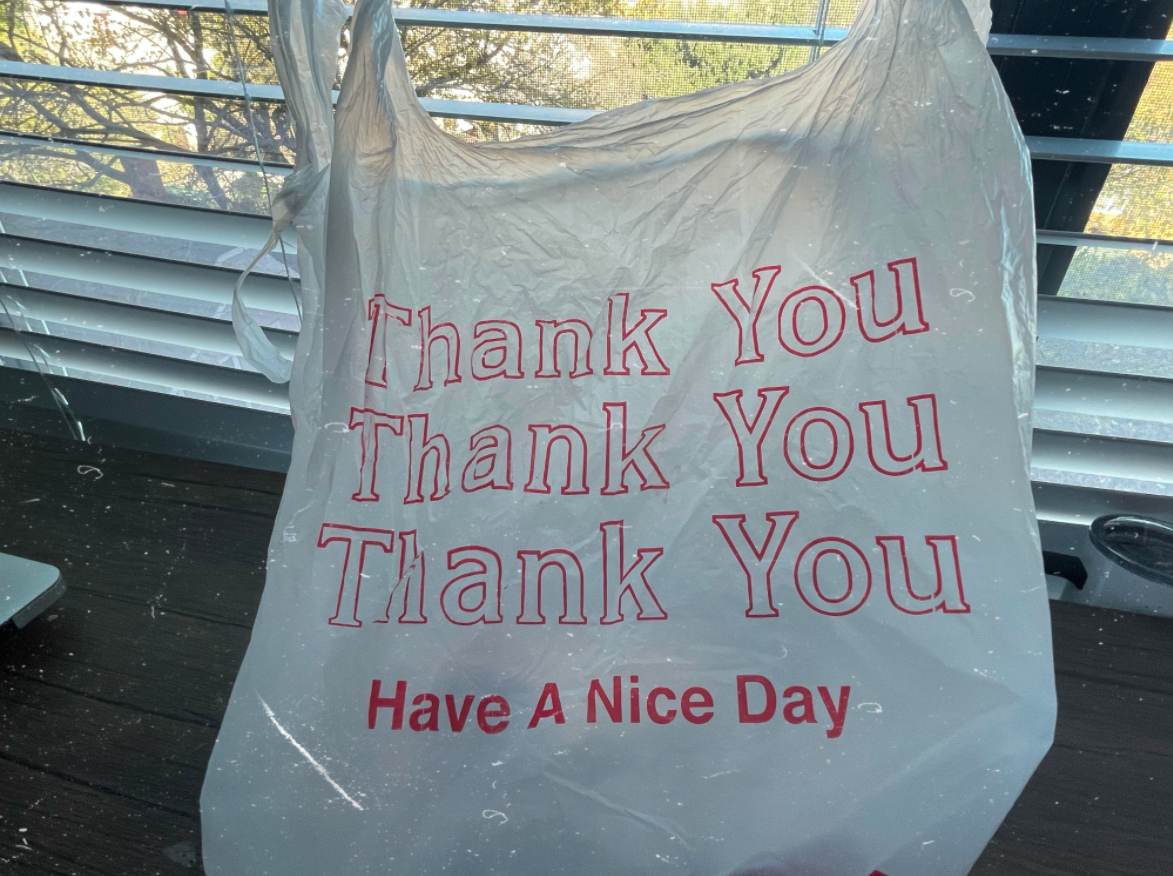 AUSTIN, TX. — The driver had only one shot at making the drop-off right.

However, there’s a catch —don’t get caught, don’t drop it off after 2 p.m., and don’t put it anywhere else but in the bed of the truck parked in the middle of the driveway.

Instructions like these have been turning the volunteer drivers at The Bridge Collective, a nonprofit dedicated to ensuring Texans have access to abortion rights, into super-secret spies on missions to deliver reproductive health kits disguised in grocery bags.

The goal of the deliveries is discretion. But achieving that discretion isn’t always easy.

Sometimes Brooke Whitfield, one of the behind-the-scenes volunteer drivers, has had to deliver kits in disguises. She’s used her young face to her advantage, pretending to be an average college student, using it to get into student’s apartments under no suspicion.

She’s even pretended to be a food delivery driver so she’ll be able to get into elevators, especially ones that require the resident’s keys to work.

“I’m just standing in this elevator with no way to go up the stairs. I was like, ‘Hey, I have a delivery, but I didn’t realize that I needed a fob. Would you mind if I went up to the fourth floor?’” Whitfield said. “The lady was like, ‘Oh yeah, no problem. Where are you going? What are you delivering?’ And I was like, ‘ahhhh, I don’t know. I’m just the delivery person,’” Whitfield said with a laugh.

Most of Whitfield’s deliveries have been contact-free experiences with minimal spy-like drop-offs. It’s just been Whitfield, her GPS, and the “Happy Hits” Spotify playlist cruising around leaving the plastic camouflaged bags on doorsteps. While Whitfield said there is some fun in the secretive missions, she said it’s empowering when the deliveries aren’t as exciting.

“I’m just delivering something very normal and very much a part of women and people’s uterus’s lives,” Whitfield said. “It shouldn’t be anything that causes stigma or secrecy in an ideal world. So those are kind of nice because it feels totally normal. It feels like I’m delivering takeout or any other normal thing that you would have delivered to your apartment.”

REPRODUCTIVE HEALTH NO MATTER WHAT

Before the pandemic, Jane’s Due Process and The Bridge Collective worked separately to help Austinites access reproductive health care by providing different resources and services. At Jane’s Due Process, young people can receive legal support to bypass parental consent laws regarding abortions or get help obtaining birth control discreetly. And The Bridge Collective provided all women with free rides to abortion appointments.

Since Texas remains one of the more restrictive states when it comes to reproductive healthcare, places like Jane’s Due Process (JDP) and The Bridge Collective (TBC) each worked to help make restrictions easier to navigate.

However, when COVID-19 kept people at home, and both Jane’s Due Process and The Bridge’s Collective’s in-person locations closed, the two organizations combined their resources to deliver reproductive health kits in grocery bags around Austin and surrounding Austin areas. With just one text to their hotline at (866) 999-5263, the two groups can send out volunteer drivers to different areas around the city.

“I think that is one thing that we emphasize is, this is legal, this is safe. These are the options, and you get to do whatever you want to do with (options),” Graci D’Amore said, program and operations coordinator at Jane’s Due Process. “I think it’s fun to be in this incognito thing and that the volunteers can be like ‘OK, I’m on this secret mission to deliver this.’”

Since the start of the grocery bag deliveries during the pandemic, D’Amore has delivered about 15 kits, sometimes as many as five kits in one day.

Inside the kits are two Pregmate pregnancy tests wrapped in colorful packaging. The two emergency contraceptives, still stuck in their plastic boxes, have a bonus. The organizations added an informative sticker to the box, letting users know the morning-after pill is less effective in people who weigh over 176 pounds, a fact many women don’t know. A few condoms are tossed in, and even a tiny, red Solo Cup women can use for the pregnancy tests.

D’Amore has been all around Austin with her trusty sidekick in her passenger seat —her golden-brown dog named Wrigley. However, Wrigley isn’t her only partner. D’Amore works with a former co-worker and friend, Amanda Bennett, a core member of The Bridge Collective, who’s also done her fair share of deliveries. Sometimes driving an hour, Bennett blasts her digital security podcasts to make a delivery.

“I’m like, ‘Oh, I don’t want to leave this person stranded,’” Bennett said. “If I can be the person or if we can be the organization that helps this person prevent a pregnancy that they don’t want or feel in control of their reproductive health, that’s a really amazing thing to be able to do. Between our text line of filling out intake (forms) and The Bridge Collective volunteers who want to continue to help in their community, it just felt like a really good marriage of services.”

The two groups made the kits and camouflaged them in plastic grocery bags to ensure confidentiality and secrecy, but the contents inside aren’t as easily accessible to obtain, Bennett said.

“With COVID we were like, ‘Wow, a lot of people are probably stuck at home and might not have the same ways to get around as they had before,’’ Bennett said. “So we wanted to make sure that even with COVID, in addition to all the other barriers to accessing emergency contraception, that people could still access it.”

Although the kits include many essential items needed for emergency contraceptives, one of the more subtle items inside is a small zine, a miniature version of a magazine, about a palm’s size. In bold and black capital letters, the front page announces to readers, “You know what’s best for you! Your Plan B & Pregnancy Test Guide with love from the Bridge Collective & Jane’s Due Process.”

The pages are filled with information such as basic sex education, a small diagram of a uterus, and numbers to Jane’s Due Process hotline and local clinics that offer resources a woman might need for an unplanned pregnancy.

While everything in the kit is important, D’Amore said the zine is one of the cooler things included because, for them, it’s about connecting people to resources.

“I know that’s one thing that the Bridge and JDP emphasize is ‘Let’s present you with all of the facts and support you in whatever you want to do because there’s no judgment on our part,’” D’Amore said.

Although D’Amore and Bennett have made their fair share of kit deliveries and worked the hotline themselves. They said it’s the work of the volunteer drivers that make their vision and work possible.

Suited up in a comfy dress and her trusty pair of Chacos, Whitfield is armed with her small, white Kia Sportage —the one with the raccoon decal throwing up peace signs on the back— when she makes her deliveries around Austin.

“It’s like a lighthearted way to think about doing something that has very real or heavier impacts so it’s kind of nice,” Whitfield said.

Although Whitfield agrees her sticker is a little silly, the deliveries she does are not only serious but quite needed, especially in Texas.

“The Bridge Collective is filling a gap. We’ve had a lot of people requesting these services, which I think is just highlighting that the need is there,” Whitfield said. “Whether that’s because people don’t know where to go, or unfortunately, things like emergency contraception are fairly expensive.”

Plan B One-Step, the generic brand of emergency contraceptive, can range from $40 to $50 for one pill in most local pharmacies. The dime-sized pill has about 1.5 mg of levonorgestrel, the hormone used to prevent fertilization, inside, meaning it’s less effective in women who weigh 155 pounds or more.

When Whitfield first started working with The Bridge Collective a couple of months ago, she had just moved to Austin from Washington, D.C.. Although she’s learning to love Austin and figuring out how to be a Texan, she saw how different reproductive access was.

“I’m used to D.C. where things are so accessible, but in Texas, it’s a very conservative place with a lot of restrictions on reproductive health,” Whitfield said.

Kami Geoffray, CEO of Every Body Texas, a nonprofit that disburses Title X funds to clinics in Texas, agrees the state is rigid on access. She said while Texas is more restrictive, it’s even more restrictive for minors. In Texas, minors cannot access things like contraceptives or abortions without parental consent, so bringing the resources to them, Geoffray said, is what makes TBC and JDP initiative and the kits so helpful.

“I think it’s the philosophy of meeting people where they are, and right now, people are in their homes, and people are not able to get to the four walls of a clinic,” Geoffray said. “If you’re able to bring clinical care, including condoms and Plan B, and information about how to get to a Title X clinic, all of that is really helpful.”

Despite the restrictions, the differences between her hometown and Austin, and amid a global pandemic, Whitfield continues to deliver kits happily. In a way, she said, it feels like she’s helping younger versions of herself access items and get answers to the questions she couldn’t access in her household.

“I love feeling like I’m helping contribute to younger versions of me look at these things sooner and to not go through the hoops and hurdles that you have to go through to get adequate reproductive health services and knowledge,” Whitfield said.