Barbie Gets Real: She’s No Longer One Size Fits All 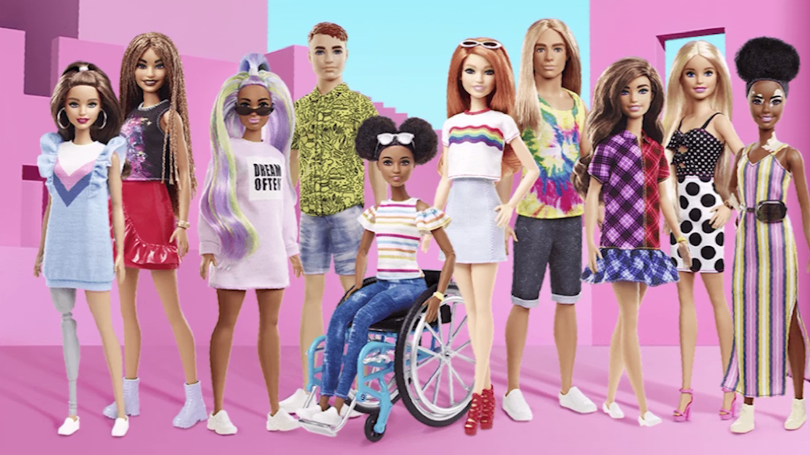 AUSTIN, Texas—Growing up, Barbie was the role model I always wanted, whether she was the woman who earned straight A’s in school, the woman who bought a Dream House or the girl who didn’t need her parents’ permission. When I became old enough to learn of the negative criticism Barbie faced over her unrealistic proportions, her thin, white domestic ideal, I was confused. I never looked at my Barbie and thought she was too thin or white. I saw whoever I wanted to see: she’s the woman who had it all.

Barbie is now 60-years-old, without a single wrinkle, and has without a doubt evolved throughout the decades. Today, Barbie is no longer the traditional blonde-babe with blue eyes, surfing the waves in Malibu, but a judge, a mathematician or athlete. Lisa McKnight, senior vice-president and global general manager for Barbie, said today 55 percent of the dolls sold around the world have neither blonde hair nor blue eyes.

Inventor, Ruth Handler, created the iconic doll in 1959 as a way to teach girls they had choices and could be anything.

By the 1960’s Barbie had begun to build her resume. She traveled to space in 1965, became a surgeon in 1973, a CEO by 1985 and the President of the United States in 1992. As Barbie made her way as a career woman, her pin-up physique and lack of diversity would stir harsh reviews for decades to come. By 1963 women were protesting the same body men had ridiculed. Again, in 1993, a group called the Barbie Liberation Movement stood on the fact that Barbie taught girls it was more important to be pretty than smart.

As a Barbie girl, a name used for girls who love Barbie, having a doll who represented my culture was a huge bonus. However, my child-eyes didn’t see the difference between these three Barbie dolls —white, black and brown— I only ever saw a pretty doll. As an adult, I not only see a pretty doll, but a woman who held careers in fields women weren’t a part of. Even before holding my first tan-skinned doll, I thought every doll, no matter what, was named Barbie. Today, Mattel released dolls such as Midge, Teresa and Christie, which were all said to be friends of Barbie. In the eyes of a kid, every doll is Barbie despite being marketed otherwise.

As Barbie’s sales continued to rise, American beauty standards continued to change. According to BBC, if the original swimsuit Barbie was scaled to human size she would have a 21-inch waist and 30-inch hips. In comparison, a 2018 U.S. report found the average waist size of American women was 39 inches. As a Latina, who stands at 5 feet 8 inches tall with 41-inch hips, I agree the company was only highlighting one type of woman. Yet, my 7-year-old self never noticed Barbie’s hip size, let alone convince myself to starve myself. I only ever saw what Barbie was capable of.

My experience with Barbie was always a positive one. Although, there was one doll my mother refused to buy for me: the 2002 Happy Family Midge & Baby doll set.

My 7-year-old eyes gravitated towards a pregnant Barbie doll called Midge. My mother took a look at pregnant Midge and shook her head in disapproval, “Oh no, that’s so wrong,” and quickly put the doll back on the shelf.

Barbie’s friend, Midge, was created in 1963 to counter claims that Barbie was oversexualized. Oddly enough, in 1982 Mattel released a version of Midge who appeared pregnant, with a magnetic, removable womb containing a fetus. According to a 2017 article, Midge lacked a wedding ring and this caused customers, like my mother, to say the doll was inappropriate and supported teen pregnancy. Later, a wedding ring was added.

The brand has always represented women empowerment. As stated on Barbie’s website, in 1985 the company launched its first “We Girls Can Do Anything” campaign. The ads encouraged girls to believe in themselves and their dreams. The commercial highlighted girls singing, “We girls can do anything, right Barbie?” and “Anything is possible as long as I try.”

However, that wasn’t enough to encourage diversity. In a 2016 study, only 35.5% of women earned bachelor’s degrees in STEM. That same year, women of color earned a smaller percentage of STEM degrees: Asian women earned 5%, Africa-American women earned 2.9% and Latinas earned 3.8%.

In an effort to reach more girls, in 2018 Barbie launched the Dream Gap Project. Empowering more role models as a key part of the Dream Gap Project, Barbie shined a light on amazing females from the past and present in an effort to inspire more girls. The campaign, #MoreRoleModels, honored extraordinary women from around the world on International Women’s Day 2018. The Inspiring Women doll line launched and featured Frida Kahlo, Katherine Johnson and Amelia Earhart.

Girls today have no limits to what their precious, prized Barbie dolls can be. To me, she was whoever I wanted her to be: a mermaid, an Olympic swimmer or a scientist. Most importantly, she was who I needed her to be to help me imagine what my future could look like and the endless possibilities I could make for myself.